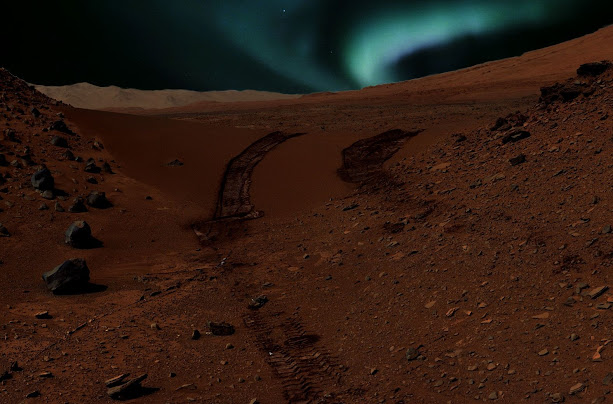 The auroras on Earth are a magnificent sight, but they aren’t unique to our planet.
Every planet save Mercury has an atmospheric light, albeit occasionally at invisible wavelengths, as have some of Jupiter’s moons… and even a comet. But it’s on Mars that things start to get interesting. The red planet is known for its missing global magnetic field, which is an important component in the creation of aurora elsewhere.
But that doesn’t rule out the possibility of magnetic fields on Mars. Some parts of the crust, particularly in the southern hemisphere, sprout localized magnetic fields. These small, local magnetic fields interact with the solar wind in fascinating ways to form Mars’ discrete (or structured) ultraviolet auroras, according to new research.
“We have the first detailed study looking at how solar wind conditions affect auroras on Mars,” said University of Iowa physicist and astronomer Zachary Girazian.
“Our main finding is that inside the strong crustal field region, the aurora occurrence rate depends mostly on the orientation of the solar wind magnetic field, while outside the strong crustal field region, the occurrence rate depends mostly on the solar wind dynamic pressure.”
We know how auroras – borealis and australis – form here on Earth.
When solar wind particles strike with the Earth’s magnetosphere, they are driven along the magnetic field lines to high latitudes, where they fall down into the upper atmosphere.
They interact with air particles there, causing the shimmering lights to dance across the sky.
Evidence implies that the occurrences occur on other bodies in comparable ways. Jupiter’s spectacular, permanent auroras, for example, are aided by the planet’s complicated magnetic field.
However, early in Mars’ history, the planet’s global magnetic field dissipated, leaving only pockets of magnetism maintained in magnetized minerals in the crust. Auroras emerge near these crustal magnetic fields, according to ultraviolet photos of Mars taken at night, which makes sense if magnetic field lines are required for particle acceleration.

The work of Girazian and his colleagues also considers the solar wind conditions. They looked at data from the MAVEN probe, which has been gathering ultraviolet photos of the red planet since 2014. It also has a device called the Solar Wind Ion Analyzer, which, as the name implies, analyzes the solar wind.

However, the brightness of the auroras appears to be unaffected by the solar wind’s pressure. This means that space weather phenomena like coronal mass ejections, which spew masses of charged particles from the Sun and are associated with higher solar wind pressure, could cause auroras on Mars.

The findings provide new insight into how interactions with the solar wind might cause auroras on a planet without a global magnetic field, according to the researchers. This data can be utilized to learn more about how discrete auroras arise on different worlds.

“Now is a very fruitful and exciting time for researching aurora at Mars,” Girazian added.
“The database of discrete aurora observations we have from MAVEN is the first of its kind, allowing us to understand basic features of the aurora for the first time.”