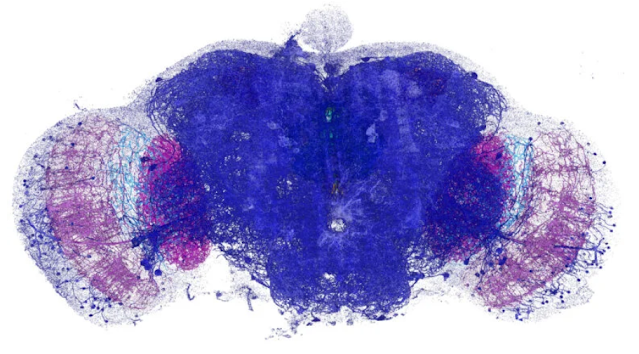 Scientists at the Francis Crick Institute have discovered a technique for gathering information on the structure and function of brain tissue at the subcellular level – a few billionths of a meter – as well as information about the surrounding environment.
The novel approach, which was published today (May 25, 2022) in the journal Nature Communications, overcomes the difficulties of imaging tissues at different scales by allowing researchers to see the surrounding cells and how they function, allowing them to build a complete picture of neural networks in the brain.
Information on tissue, cells, and subcellular structures is captured using a variety of imaging techniques. However, a single approach can only collect information about the tissue’s structure or function, and examining the tissue at a nanoscale scale (one billionth of a meter) means investigators miss out on information about the surrounding environment. As a result, imaging approaches must be integrated to provide a comprehensive understanding of the tissue.
The researchers created a system that incorporates seven imaging technologies, including in vivo imaging, synchrotron X-ray, and volume electron microscopy, in their research. They showed their method by imaging the olfactory bulb and the hippocampus in mice.
Importantly, the approach may be used to other portions of the brain or the body, giving researchers a better knowledge of a wide range of biological structures and tissues.
Each stage of the imaging procedure yields distinct results. First, the researchers utilized in vivo calcium imaging to detect which neurons were active when the mice were exposed to scents.
Brain tissue samples were scanned using several technologies after the mice were killed, including synchrotron X-ray tomography, which catches materials up to a few millimeters in length. This size allows scientists to view whole brain networks as well as where specific cells or other structures are located within the sample’s larger context. Importantly, this procedure does not harm the material, allowing it to be scanned again using a different method.
The researchers then selected areas of particular interest to be imaged with electron microscopy, capturing intricate detail at a high resolution. This might scan features as thin as 10 nanometers in some target locations, allowing researchers to detect microscopic structures such as individual synapses that connect neurons.
The scientists collaborated with the Crick’s electron microscopy group, as well as synchrotron X-ray teams at the Diamond Light Source in Oxfordshire, the European Synchrotron in France, and the Paul Scherrer Institut in Switzerland.
The team will continue its study, employing this imaging technology to learn more about the olfactory bulb while also attempting to enhance the technique.