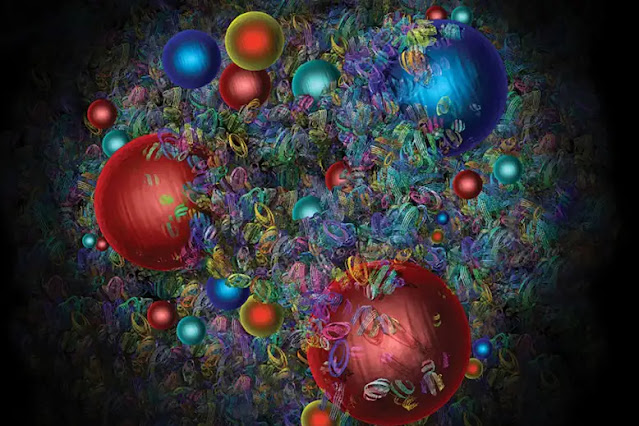 A recent research has discovered strong evidence that a proton also includes a charm quark in addition to the two up quarks and one down quark that are listed in textbook descriptions of protons.
A fundamental component of every atom, the proton appears to have a more complex structure than is typically described in textbooks. A sensitive particle physics experiment like the Large Hadron Collider may be affected by the discovery (LHC).
It was originally believed that protons were indestructible, but tests with particle accelerators in the 1960s showed that they really comprised three smaller particles called quarks. The proton includes two up quarks and one down quark out of the six different kinds or flavors of quarks.

However, since a particle’s structure in quantum mechanics is determined by probabilities, it is theoretically possible for more quarks to appear within the proton as matter-antimatter pairs. The proton may include a charm quark and its antimatter counterpart, an anticharm, according to a 1980 experiment at the European Muon Collaboration at CERN, but the results were equivocal and the subject of intense controversy.

More attempts to pinpoint the proton’s charm element were made, but various teams came up with conflicting findings and had trouble separating the intrinsic components of a proton from the high energy environment of particle accelerators, where every type of quark is continuously being produced and destroyed.

Now, Juan Rojo of the Vrije University Amsterdam in the Netherlands and his colleagues have discovered proof that the charm quark contributes just a little portion of the proton’s momentum, about 0.5%. In spite of decades of research, Rojo finds it amazing that “we’re continually uncovering new features of the proton and, in particular, new components.”
Rojo and his team used a machine learning model to create hypothetical proton structures made up of all the quark flavors in order to identify the charm component. They then compared these structures to more than 500,000 actual collisions from decades of particle accelerator experiments, including those at the LHC.
According to Christine Aidala of the University of Washington, this use of machine learning was crucial because it may provide models that physicists might not have thought of on their own, lowering the likelihood of skewed measurements.
There is only a 0.3% probability of seeing the outcomes they looked at if the proton doesn’t have a charm-anticharm quark pair, the researchers discovered. This is what physicists refer to as a “3-sigma” finding, which is typically seen as a possible indicator of something intriguing. To increase the results to the conventional criterion for a discovery—5-sigma level, or roughly a 1 in 3.5 million probability of a fluke result—more study is required.

The researchers modeled the statistical distribution of the proton’s momentum both with and without a charm quark while taking into consideration recent findings from the LHCb Z-boson experiment. They discovered that if the proton is considered to contain a charm quark, the model more closely matches the outcomes. This indicates that they are more confidence than the sigma level alone would indicate in their proposal of the existence of a charm quark. The fact that other research have come to the same conclusion, according to Rojo, “made us very convinced that our results were reliable.”
This is crucial, according to Harry Cliffe of the University of Cambridge. “Given how common this particle is and how long we’ve known about it, there’s still a lot we don’t genuinely understand about its substructure,” he adds.
According to Cliffe, additional physics investigations at the LHC that rely on precise models of proton substructure may be affected by the proton’s charm component. According to Rojo, this new structure may also need to be taken into consideration by the IceCube Neutrino Observatory in Antarctica, which searches for rare neutrinos created when cosmic rays strike particles in Earth’s atmosphere. According to him, the charm level of the proton has a significant influence on the likelihood that a cosmic ray would strike a nucleus in the atmosphere and produce neutrinos.