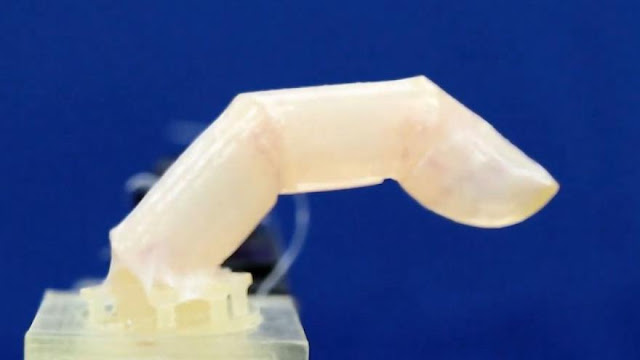 Hollywood has created a pantheon of iconic cyborgs, including the Six Million Dollar Man, RoboCop, and the Terminator. Depending on their objectives, these hybrids either strove to ruin or preserve civilization. The same thing that fascinates people about them is how they blurred the borders between humans and robots in ways that have never happened before but may happen in the future.

Fully functional cyborgs are still somewhat in the future, but researchers are developing a brand-new method of fusing humans and machines. A robotic finger coated in living skin produced from real human skin cells was created by a Japanese team. Not least because the skin can move and flex organically like the three-jointed digit does thanks to the technique, the artificial appendage has an incredibly lifelike appearance. The skin can even mend when wounded or split, and it feels far more like human skin than silicone robot skins when you touch it. Comparing covering a single finger to covering an entire humanoid robot in synthetic human skin is absurd. However, the novel proof of concept, described in a paper published in Matter, opens up a world of amazing possibilities.

According to Shoji Takeuchi, a biohybrid systems engineer at the University of Tokyo in Japan, certain silicone-skinned robots may appear to be highly human-like from a distance but are actually artificial. His team decided to use biohybrid robots as a result. Our objective is to create robots that actually resemble humans, he claims. “We believe that covering it with the same substance as a human being—living skin cells—is the only way to produce a look that may be mistaken for a human being.”

Takeuchi and colleagues created a type of skin-tissue cocktail, which they then shaped around the mechanical finger to create a smooth, realistic-looking covering.

The technique of applying the skin involved two steps. The two primary components of the connective tissues of our skin, collagen and human dermal fibroblasts, were first combined. The artificial “dermis” stuck to the digit as the tissues naturally shriveled to generate a firm, snug-fitting covering over the finger. The finger was immersed in this solution and cultured in an incubator for three days. This layer acted as a base for shaping and applying a second coat, called “epidermis,” which is made up of the same human skin cells that make up around 90% of the outer layer of our own skin. To create the end result, the second solution was repeatedly and irregularly poured onto the finger and allowed to culture for two weeks.

The resultant skin has a texture similar to that of a human, and it may be repaired after being sliced or split by wrapping it in a collagen bandage that progressively fuses with the skin itself. This method was motivated by the use of hydrogel grafts to treat severe burns.

Commercially accessible experimental human skin cells were used to build the robot’s skin. Takeuchi notes that other sectors, including regenerative medicine and cultured meat research, are actively engaged in mass production research and that their efforts will be helpful to his own work on covering robots in human skin.

Other advancements in the creation of skin that might be used on robots include the creation of sheets of living human skin that must be sliced and customized to the various body forms. A printable artificial skin composed of soft hydrogel that is packed with sensors that can sense pressure, temperature, and even hazardous compounds was recently disclosed by Caltech researchers. However, it could be challenging to adapt printed skin to the distinctive forms of human anatomy, such as a finger or a hand. Without the necessity for such efforts, Takeuchi’s technique produces a form fit.

Despite being a very small portion of the human body, the electric motor-driven finger is a means to investigate how the skin may realistically cover moving elements. Finding more effective techniques to make the skin in greater quantities is the first obstacle in scaling up the project.

Takeuchi adds that the product is still considerably weaker than our own skin and that it requires ongoing care in order to survive. “It needs a system that has a vascular-like structure within that offers a steady flow of nutrients,” he says. “To maintain it for a long length of time.” The team is considering ways to simulate sweat glands and blood arteries to assist the skin absorb water in an effort to find a solution to the issue.

Of course, looks don’t tell the whole story. Humans interact with one another through touching each other’s skin, and real flesh feels far more authentic than silicone.

There is a ton of scientific literature on touch and its role in fostering connections and wellbeing, notes Maria Paola Paladino, who examined human attitudes toward robots at the University of Trento in Italy. According to some study, for instance, if someone touches you in a way that you’re open to, you start to treat them more kindly, she adds. Will you be able to detect a human touch if you touch this robot skin? That may be incredibly fascinating in terms of human experience.

Another crucial aspect that needs be developed for robots to interact more organically and securely as they become a more pervasive part of our daily lives as humans is their own sense of touch. To give robots a feeling of touch, scientists have experimented with a variety of electrical sensors and other techniques. Takeuchi wants to investigate simulating a natural nerve system to give skin a feeling of touch for his own finger experiment.

The future of artificial intelligence has been hotly contested since the advent of robots. Some people wonder what the repercussions will be if we make robots much smarter than they now are. The appearance of intelligent machines also raises similar concerns, such as how human-like we want robots to seem to be.

Diverse human responses exist to robots. The majority of college-aged individuals liked their robots to appear like robots, according to a Georgia Institute of Technology research, while older folks chose ones with more human-like features. The function of each robot is also important. In contrast, those interacting with us and carrying out’smart’ duties like providing information were favored to appear more like humans. For example, the majority of participants in the study wanted housecleaning robots to look more like machines.

Our regular interactions with social robots will become more meaningful. (Robots are already capable of conducting your funeral, checking you into a hotel, and guiding you through a workout.) And there are already some robots that resemble humans quite a bit, such as Hanson Robotics’ Sofia, which has its own social media profiles. David Hanson, the company’s founder, elaborates on the advantages of creating machines that resemble us. According to an article in the technology journal IEEE Spectrum, “In building human-inspired robotics, we hold our machines to the highest standards we know—humanlike robots being the summit of bio-inspired engineering.”

More than 800 new robot friends are moving into new residences with older folks in New York. The ElliQ…

Robots can now be built with living humanlike skin

Hollywood has created a pantheon of iconic cyborgs, including the Six Million Dollar Man, RoboCop, and the Terminator. Depending…