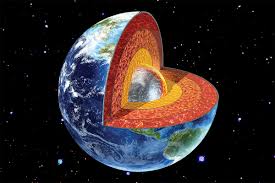 Charged particles become caught in a tumultuous dance of convection currents deep under the surface, resulting in the Earth’s magnetic field.

However, according to a recent research published in the Proceedings of the National Academy of Sciences, the madness may have a method.

The planet’s magnetic field fluctuated like clockwork every seven years, traveling westward at 900 mph around the equator, according to a team lead by Nicolas Gillet from the Grenoble Alpes University in France, suggesting that there’s still a lot to learn about the inner workings of our planet.

Gillet told New Scientist, “What is crucial to know is that the magnetic field in the core develops over extremely long timeframes.” “On top of that, all we saw were a few little wiggles.”

According to experts, a tiny layer of stratified rock might be producing magnetic field fluctuations between the Earth’s outer core and mantle. However, according to Gillet’s findings, these changes might occur even if the rock layer is absent.

His team looked examined geomagnetic field data collected by satellites and ground-based observatories between 1999 and 2021. The discoveries, they claim, might have far-reaching ramifications for our understanding of our planet’s genesis.

“We’re trying to figure out the science behind the observed development of our planet’s magnetic field,” Gillet told Newsweek. “It evolves throughout all time scales, with the longest periods exhibiting the most significant alterations.”

“These interannual fluctuations have remained unexplained in ground-based records since their discovery in the late 1970s,” he noted. “Understanding them gives a portal to the deep core field, which we can’t directly investigate with observations alone.”