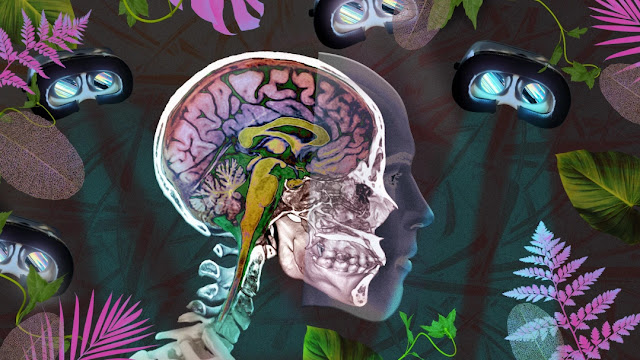 On important measures, a VR experience produced results that were comparable to those of participants who had used medium quantities of LSD or magic mushrooms.
David Glowacki had a severe fall while out hiking in the mountains fifteen years ago. His lungs started to fill with blood as soon as he touched the ground. Glowacki’s area of perception widened as he lay there gasping. When he looked down at his own body, he saw that it was made up of balled-up light rather than his usual form.

He remembers, “I realized that the amount to which I inhabited my body was proportional to the intensity of the light. But he wasn’t afraid to watch it in the dark. Glowacki could see that the light wasn’t going out from his new vantage point. It was changing and seeping out of his body into the surroundings.
Glowacki had a supreme sense of serenity as a result of this understanding, which he understood to mean that his consciousness might outlive and transcend his physical form. He therefore pondered what may happen after what he believed to be death.

Glowacki, a computational molecular physicist and artist, has endeavored to reclaim that transcendence after his injury.

His most recent endeavor, Isness-D, is a VR experience. A recent study published in Nature Scientific Reports found that the program had the same impact on four important psychedelic research markers as a medium dosage of LSD or psilocybin (the primary psychoactive ingredient in “magic” mushrooms).
Isness-D is made for four to five persons in any location worldwide. Each participant is shown as a hazy cloud of smoke with a ball of light positioned just over the heart.

When participants assemble in one location in the virtual reality scene to overlap their dispersed bodies, it becomes hard to distinguish where one person begins and ends. This experience is known as energetic coalescence. The emotions of profound connectivity and ego attenuation that follow are similar to those that are frequently experienced during psychedelic experiences.
Minimizing ego

The capacity of psychedelic substances to alter sensory experience and the way we absorb information makes them a common class of medications. Clinical trials using these drugs, which have been revived after being shut down in the 1970s, have shown that psychedelic-assisted therapy is remarkably effective at reducing the symptoms of addiction, depression, post-traumatic stress disorder, and obsessive-compulsive disorder, for which standard treatments often fall short. In 2019, the FDA accelerated the approval of psilocybin as a “breakthrough treatment” for severe depression.
Isness-D was not created by Glowacki with the intention of imitating a psychedelic experience. But he was interested in utilizing VR to create what is described as a “self-transcendent experience,” which is something that psychedelics routinely trigger.
Self-transcendent experiences come in a variety of forms. One may argue that losing oneself in a good book is a stronger experience than the ego death brought on by heavy dosages of psychedelics. People who express more deep self-transcendence in psychedelic therapeutic studies often have the greatest symptom relief.

Our conventional self-definition as a distinct individual, apart from other individuals and the world, dissolves during a self-transcendent experience. A profound sense of connectedness with others or your environment during such an encounter enables you to broaden your conception of who you are to include them.
Self-transcendent experiences can be attained in many different ways. The limits of the self are frequently briefly dissolved during near-death experiences like Glowacki’s. The overview effect, which astronauts often describe feeling after viewing Earth from orbit, fosters a sense of interconnectedness with all of mankind. Self-transcendence can also be attained through meditation.
There is also Isness-D. Its visual inspiration, in Glowacki’s words, came from quantum physics, “where the concept of what is matter and what is energy starts to get muddled.”
Glowacki and his associates examined the emotional reaction that Isness-D produced in 75 individuals for their research. They employed the MEQ30 (a mystical experience questionnaire), the ego dissolution inventory scale, the “communitas” scale, and the “inclusion of community in self” scale as their bases for assessment. A profound sense of our shared humanity that transcends societal structures is known as communitas. The replies from the participants were then compared to those from double-blind, previously published psychedelic investigations.

I made the decision to give Isness-D a try last week. When I arrived, the other three Isness-D participants—from California, Portugal, and Italy—were already seated in a circle facing one another. The area around us was empty and dreary, with a sky that made me think of the hour just before morning. I saw two dim lights where my hands ought to have been when I looked down, which I could brighten by pushing the controllers in my palms.
A “molecular thread”—a lengthy strand of alanine, one of the most basic amino acids—was the sole thing in the desolate environment, jiggling with realistic spontaneity. Glowacki continues, “We had some physics models hanging around for how to approximate its movements in real time. We were told to hold the thread at the beginning and say something we wished to connect to more deeply, as though we were infusing it with this purpose.

Then, much like a guided meditation, a narrator led our thoughts and motions. The soft voice told us to move a bit closer when it was time to energetically combine. Then, as four clumps of smoke billowing together, we drifted even closer together until we eventually left our four corners and united in the center of the circle.
I was concerned about invading the other participants’ personal space as we drew closer. Then I realized that there were seas and thousands of miles between us, and that the whole point was to give up the idea of personal space. So I made an effort to relax into the closeness.
Agnieszka Sekula, a PhD candidate at the Centre for Human Psychopharmacology in Australia and a cofounder of a startup that employs VR to augment psychedelic therapy, claims that what happens in VR is the feeling of entirely forgetting about the presence of the outside world. Therefore, there is a clear analogy between that and the feeling of being in a different world when using psychedelics that feels more real than what is actually there.
But she adds that “there are obviously variances” between the sensations associated with virtual reality and psychedelic experiences. She therefore respects that Isness-D outlines a fresh road to transcendence rather than simply imitating one that already existed.
The long-term impacts of an Isness-D encounter and the potential psychedelic-like effects of virtual reality in general require more study. The prevalent view on how psychedelics improve clinical results (a topic that is far from clear) holds that the subjective trip experience and the drug’s neurochemical effects on the brain work together to produce this effect. Since VR simply replicates the subjective experience, it may not have as great of a therapeutic benefit as other technologies.

University of California, San Francisco professor of psychiatry Jacob Aday wishes the study had taken participants’ mental health into account. He believes virtual reality (VR) has the potential to reduce activity in the default mode network, a brain network that is active when our thoughts aren’t focused on a particular task and that psychedelics may inhibit (scientists theorize that this is what causes ego death). When viewed encouraging films, users’ participation on this network decreased. Isness-D may lower the awe factor similarly since VR is more effective at evoking it than traditional video.

Anyone with a VR headset may already sign up for weekly Isness sessions thanks to the Glowacki lab-spun firm aNUma. The firm offers a comparable experience called Ripple to assist patients, their families, and their carers in coping with terminal illness. It also sells a condensed version of Isness-D to businesses for virtual wellness retreats. Even in couples and family therapy, Isness-D is being tested by one of the paper’s coauthors.
We’ve discovered that portraying individuals as pure brilliance frees them from a lot of assumptions and preconceptions, according to Glowacki. This includes biases and unfavorable views regarding their appearance. For cancer patients and their loved ones, he personally led aNUma sessions. One died a few days later; she had pancreatic cancer. She and her buddies were a group of jiggling balls of light the last time they got together.
During one part of my Isness-D experience, movement left a brief electric trail that served as a marker for my previous location. This went on for a while before the narration inquired, “How does it feel to view the past?” I started to consider the folks from my past that I had wounded or missed. I wrote their names in the air in clumsy script with my finger. I saw them go as swiftly as I could write them.