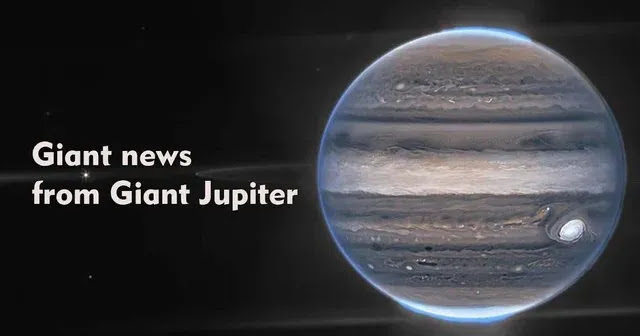 Jupiter has a lot going on, including enormous storms, strong winds, auroras, and extremely high temperatures and pressures. Recently, fresh photographs of the planet were taken by NASA’s James Webb Space Telescope. Webb’s views of Jupiter will provide researchers with considerably more information about Jupiter’s interior.
Planetary astronomer Imke de Pater, professor emerita at the University of California, Berkeley, remarked, “We hadn’t really anticipated it to be this excellent, to be honest.” As part of a global partnership for Webb’s Early Release Science initiative, De Pater oversaw the observations of Jupiter alongside professor Thierry Fouchet from the Paris Observatory. The Webb mission itself is a collaborative effort between NASA, the Canadian Space Agency, and the European Space Agency (Canadian Space Agency). The fact that we can see features of Jupiter, its rings, small satellites, and even galaxies in one shot is very amazing, she added.
The observatory’s Near-Infrared Camera (NIRCam), which has three specialized infrared filters that highlight the features of the planet, produced the two photos. The light has been mapped onto the visible spectrum since infrared light cannot be seen by the human eye. The shortest wavelengths are often represented as more blue, whereas the longest wavelengths tend to seem redder. Judy Schmidt, a citizen scientist, worked with scientists to convert the Webb data into photos.
In the composite image of many Webb photographs used to produce the standalone view of Jupiter, auroras can be seen extending to great heights over both the northern and southern poles of t

he planet. The light from the auroras is filtered via a redder color map, highlighting light reflected from lower clouds and upper hazes. The northern and southern poles may be seen to be surrounded by hazes in a separate filter that is mapped to yellows and greens. The light that is reflected from a deeper primary cloud is shown by a third filter that is blue-mapped.

In these pictures, the Great Red Spot, a well-known storm that is so large it may engulf Earth, as well as other clouds, seem white because they are reflecting a lot of sunlight.
The Great Red Spot and the equatorial area also have high-altitude hazes, according to Heidi Hammel, Webb transdisciplinary scientist for solar system studies and vice president of AURA science. The numerous dazzling white “spots” and “streaks” are probably extremely high-altitude cloud tops from condensed convective storms, according to the research. Dark ribbons north of the equatorial zone, in contrast, are cloudless. 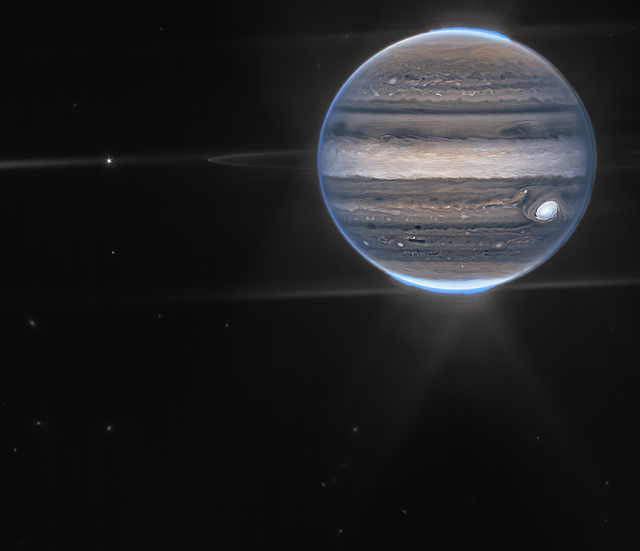 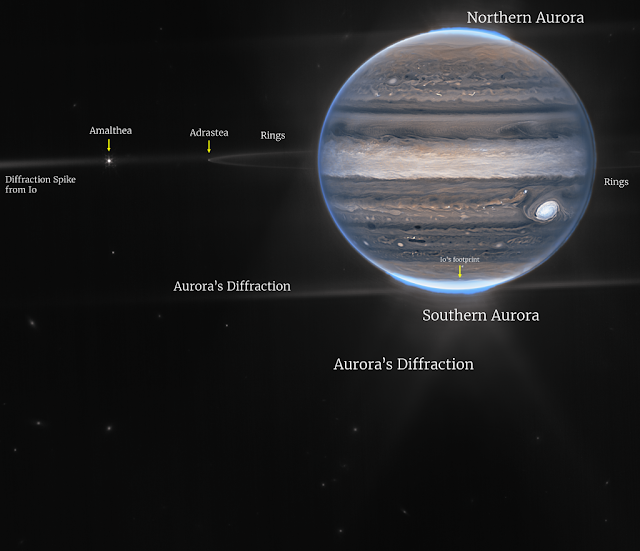 Webb observes Jupiter with its faint rings, which are a million times fainter than the planet, and two very small moons known as Amalthea and Adrastea in a wide-field view. Galaxies that are “photobombing” this Jovian picture are most likely the fuzzy dots in the bottom background.

The dynamics and chemistry of Jupiter, its rings, and its satellite system are all studied by our Jupiter system program, which, according to Fouchet, is represented by this one picture. In order to learn new scientific information about the biggest planet in our solar system, researchers have already started examining Webb data.

The information from observatories like Webb doesn’t come in a tidy bundle to Earth. Instead, it includes details regarding the intensity of the light detected by Webb’s detectors. The Space Telescope Science Institute (STScI), Webb’s mission and science operations center, receives this data as raw data. The data is calibrated by STScI and sent to the Mikulski Archive for Space Telescopes for distribution after being processed. In the course of their study, scientists then interpret that data into pictures like this (here’s a podcast on it). While a staff at STScI formally prepares Webb photographs for publication, citizen scientists, or amateur astronomers, frequently go through the public data library to retrieve and process images as well.
These fresh pictures of Jupiter were analyzed by veteran citizen scientist Judy Schmidt of Modesto, California. She worked with Ricardo Hueso, a co-investigator on these observations who researches planetary atmospheres at the University of the Basque Country in Spain, to create the image that shows the small satellites.
Schmidt lacks any formal training in astronomy. But ten years ago, she discovered her unquenchable enthusiasm for image processing through an ESA contest. The public was encouraged to sift through Hubble data for new jewels as part of the “Hubble’s Hidden Treasures” contest. Out of over 3,000 entries, Schmidt’s photograph of a nascent star won third place. 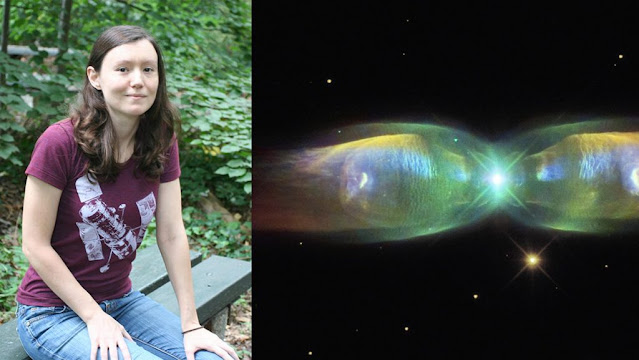 She has been working on Hubble and other telescope data as a hobby since the ESA competition. She explained, “Something about it simply stayed with me, and I can’t stop.” Every day, “I could spend hours and hours.”

She processed photographs of nebulae, globular clusters, star nurseries, and other more amazing cosmic things since she loved astronomy images. “I strive to get things to seem natural, even though it’s not anything near to what your eye can perceive,” is her guiding principle. Professional astronomers have taken notice of these photographs, including Hammel, who previously worked with Schmidt to improve Hubble images of comet Shoemaker-Levy 9’s encounter with Jupiter.
Because of how quickly Jupiter revolves, Schmidt claims that it is really more challenging to study than farther-flung celestial wonders. When Jupiter’s distinguishing characteristics have rotated and are no longer aligned after the photographs were shot, it might be difficult to combine a stack of images into a single perspective. To arrange the photographs in a logical fashion, she occasionally needs to make digital modifications.
Schmidt would be most enthusiastic by more Webb images of star-forming areas, even though Webb will provide observations about every stage of cosmic history. Herbig-Haro objects, which are tiny nebula patches with intense jets produced by young stars, particularly intrigue her. She added, “I’m so excited to witness these strange and amazing young stars bursting holes into nebulas.