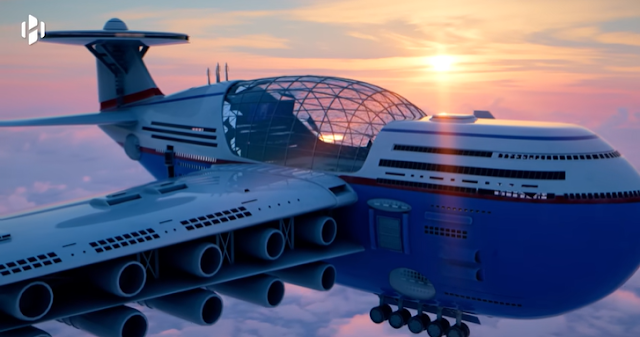 It is clearly not a bird, yet it resembles an aircraft in several ways. In particular, it’s a fantasy nuclear-powered sky hotel dubbed the Sky Cruise, a nonexistent but certainly extremely intriguing notion.

The remarkably realistic video representation depicts a massive flying ship that is purportedly intended to carry over 5,000 passengers in almost continuous flight. Along with breathtaking natural scenery, including a close-up view of the Northern lights, there are almost unlimited activities available, including upscale dining options, a sizable mall, gyms, theaters, pools, wellness and medical facilities, event venues, and more. Even getting married in the skies would be a pretty spectacular way to say “I do,” the narrator observes.

However, as one YouTube commentator noted, it appears that one very crucial amenity is missing.

They added, “I’d still like a retro arcade where I can redeem my tickets for sh*t goodies. Actually, fair.

A “small nuclear reactor” that “uses highly-controlled fusion reaction” is the only source of electricity for the idea skycraft’s 20 electric engines. Additionally, it wouldn’t frequently need to land because it wouldn’t require refueling. Commercial or private jets would be used to transport guests to and from the sky-high hotel, and all repairs would be completed in the air.
However, many critics were eager to point out design problems, not the least of which was the fact that there is no such thing as practical nuclear fusion at this time. Even if it worked, there would still be enormous engineering difficulties to overcome.
Another YouTuber said, “If physics and aerodynamics didn’t exist, then this vessel could really be able to take off.” Harsh!
The biggest warning of all, though? The design “combines the qualities of a commercial airliner, while presenting the ultimate of luxury,” according to the narrator. That seems like a significant narrative hole considering that a commercial jet and luxury do not go together.
I bet I still wind myself sitting next to someone else’s yelling three-year-old for the whole of the journey, as another reader put it so succinctly.