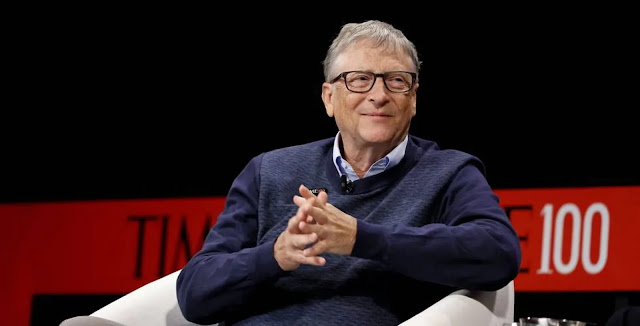 The founder of Microsoft made a $20 billion contribution to his foundation, which would see a 50% boost in funding for global health, poverty, and equality.
Bill Gates, the creator of Microsoft, has promised to dethrone himself from the list of the richest persons in the world by giving away all of his money to his own foundation, which he co-directs with his ex-wife Melinda French Gates.
In a post on his blog GatesNotes on Wednesday, Gates stated, “As I look to the future, my aim is to contribute all of my fortune to the foundation aside from what I spend on myself and my family.” “I will drop off the list of the richest persons in the world someday,”

The Microsoft founder said in the article that he was transferring $20 billion to the Bill and Melinda Gates Foundation’s endowment fund. Bloomberg estimates that this accounts for one-fifth of his wealth. With this contribution, Bill and Melinda Gates have given $55 billion throughout the course of their lives, ranking them as the “world’s largest philanthropists of all time,” according to Forbes magazine.
The Bill and Melinda Gates Foundation has stated that, as a result of the donation, it would be able to expand its yearly expenditure on global health, poverty alleviation, and equality by 50% until the year 2026. Increasing funding is intended to solve “compounding global challenges,” according to one of the biggest foundations in the world.

The Microsoft founder continued: “My providing this money is not at all a sacrifice. I appreciate the opportunity to work on such monumental problems, and I feel obligated to give back to society in ways that will have the most positive influence on people’s lives.

Several huge global setbacks over the past few years have left many people discouraged and wondering whether the world is destined to get worse.

The Giving Pledge, an effort in which the world’s wealthiest people and families vow to devote the majority of their money to philanthropic causes, was founded in 2010 by Bill and Melinda Gates and business mogul Warren Buffett. More than 400 people have joined on to the cause since the first forty signatories.
Melinda French Gates gave the foundation $15 billion in July 2021, and in July of this year, Buffett gave the organization another $3.1 billion. The Bill and Melinda Gates foundation reported that it had spent $79.2 billion since its founding in 2000, bringing the endowment to around $70 billion with the $20 billion gift made by Bill Gates.
Despite being divorced in 2021, Bill and Melinda Gates are still both co-chairs of the foundation. It was discovered earlier this year that Melinda French Gates had intended to divide her wealth among many humanitarian endeavors rather than giving it entirely to her personal foundation following their split.
Gates said in his blog post, “Several enormous worldwide defeats over the past several years have left many people frustrated and wondering whether the world is doomed to keep getting worse.” “We must all do more to address the grave issues of our day,”

Bill Gates to donate entire fortune to his foundation: ‘I will drop off world’s richest list’

The founder of Microsoft made a $20 billion contribution to his foundation, which would see a 50% boost in funding…