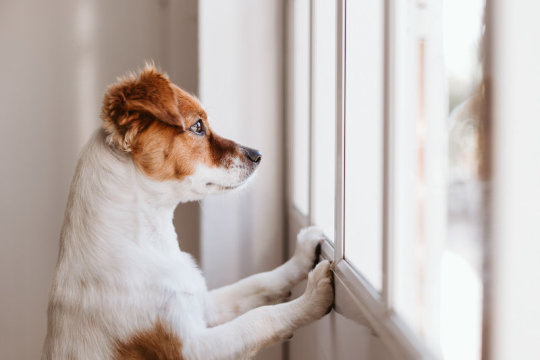 Clearly, dogs and people have a unique relationship. Do dogs, like us, cry more often when they are overcome with emotion? According to a recent research that was published in Current Biology on August 22 and may be the first to address this issue, our canine companions’ eyes do indeed brim up with tears. In actuality, it frequently occurs when they are reunited with you.
According to Takefumi Kikusui of Azabu University in Japan, “We discovered that dogs shed tears associated with positive emotions.” “We also identified oxytocin as a potential underlying mechanism behind it.”

Following the birth of one of his two standard poodles six years ago, Kikusui and associates discovered the finding. When his dog was feeding the puppies, he saw that something in the dog’s face had altered; there were tears. Although those tears don’t fall as frequently as they do in humans, they nonetheless have teary eyes.
That made me think that oxytocin would make people cry more, adds Kikusui.
He said that oxytocin is referred described as the maternal or “love hormone.” Additionally, the researchers were aware that during encounters, oxytocin is released in both dogs and their owners. They thus made the decision to test if reuniting may cause dogs to cry.

Before rejoining with their owners, the dogs underwent a normal test to gauge how much they cried. They discovered that when they reconnected with the familiar individual and not with a stranger, their tear production did in fact increase.

The amount of tears the dogs produced increased after oxytocin was injected into their eyes. That result lends credence to the hypothesis that oxytocin release contributes to the production of tears when people and their dogs reunite.

Additionally, they asked participants to assess images of dogs’ faces with and without added tears, and it found out that participants responded more favorably to images of dogs with watery eyes. These results imply that dogs’ tears contribute to the development of deeper bonds between owners and their canine companions.
Kikusui claims that the results were unexpected. “We were all thrilled that this would be a world first because we had never heard of the fact that animals shed tears in happy situations, such as being reunited with their owners.
In this instance, it appears that dogs cry in circumstances that people would deem “pleasant.” It has not yet been investigated if dogs also cry when they experience bad feelings. Also unknown at this time is if dogs cry when they reunite with other dogs. They want to find out if this reaction also has a social purpose in the canine community. However, they claim that for the time being, it appears to have clear implications for the relationship between dogs and people.
According to Kikusui, “dogs have become a companion of people, and we may develop ties.” “In this process, it’s probable that the owners will take better care of the dogs that have teary eyes when interacting with them.”

Materials provided by Cell Press. Note: Content may be edited for style and length.