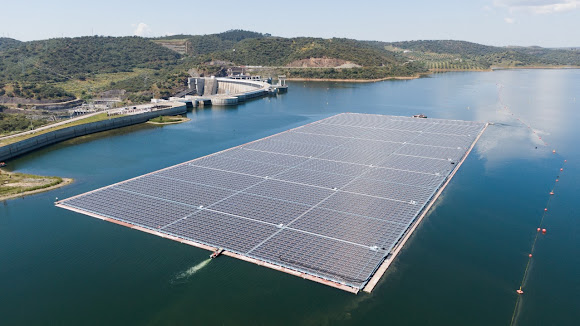 According to Reuters, Europe’s largest floating solar farm will begin producing 7.5 gigawatt-hours per year in July.
The solar farm is built by Portugal’s main utility Energias de Portugal (EDP), on Western Europe’s biggest artificial lake, the Alqueva reservoir. Two tugboats transport a massive array of 12,000 solar panels, the size of four soccer fields, to its mooring. The solar panels will be connected to lithium batteries with a capacity of 2 GWh. It will be able to power around 1,500 homes.
EDP group director in charge of the solar project, Miguel Patena, stated that the power generated by the floating park, which has a capacity of 5 megawatts (MW), would be a third of the cost of electricity generated by a gas-fired plant.
“This project is the biggest floating solar park in a hydro dam in Europe, it is a very good benchmark,” Patena remarked.
Ana Paula Marques, a member of EDP’s executive board, stated that the Alqueva project was part of the company’s “100% green by 2030” plan. EDP’s installed capacity of 25.6 GW is now 78 percent hydropower and other renewables.
In 2017, EDP installed the first trial floating solar project in Europe on the Alto Rabagao dam, with 840 panels, to see how hydro and solar electricity could work together.
EDP has already announced intentions to extend the Alqueva project, securing the license to construct a second floating farm with a capacity of 70 MW in April.

Other floating farms around the world

Floating panels are especially cost-effective since they may connect to existing power grid lines and do not require costly real estate, such as those atop hydropower reservoirs.
Many countries have constructed floating solar panels in order to obtain as much renewable energy as feasible. The world’s largest floating solar farm, with 145,000 solar panels, was created at the Sirindhorn Dam on the Lam Dom Noi River last year, providing 45MW of power.
Another good example is the world’s first mountain solar farm located at an altitude of 1,800 meters above sea level on the Lac des Toules reservoir in Valais, Switzerland.
The project which was built by Romande Energie was awarded the Swiss Watt d’Or medal for the greatest renewable energy invention in 2020. The floating solar farm generates around 800 megawatt hours of electricity each year.
Singapore has recently formally launched its floating solar farm on the Tengeh Reservoir, which is made up of 122,000 solar panels spanning 45 hectares and producing 60 megawatt-peak (MWp) solar photovoltaic (PV), in an effort to assist the country contribute to the global climate crisis.

According to Reuters, Europe’s largest floating solar farm will begin producing 7.5 gigawatt-hours per year in July. The solar farm…