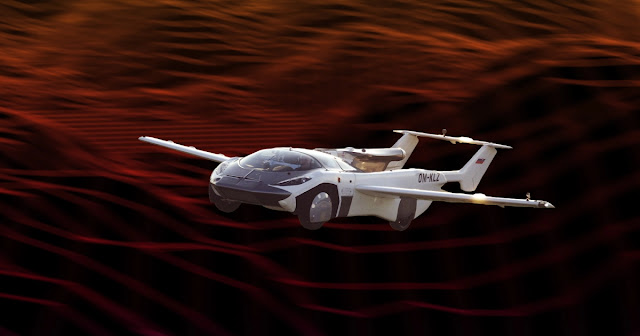 What can that possibly signify for international transportation?
The Slovak Transport Authority has granted an official Certificate of Airworthiness (CoA) to a car-plane hybrid vehicle known as the “AirCar” (STA).
What is the AirCar, and what may it imply for transportation throughout the world?
The vehicle is similar to other automobiles on the road in that it has two seats, four wheels, and an engine driven by fossil fuels. It also features retractable wings, though, and when they are extended they enable the car to take off from a runway much like an airplane.

It just takes 2 minutes and 15 seconds to go from a car to an airplane.

To take off, the AirCar must accelerate to 75 mph on a runway. Once in the air, it may ascend to a height of 8,000 feet and travel at a peak speed of 100 mph.
Its range is around 620 miles; in contrast, flying from Boston to Washington, D.C. is just approximately 400 miles long.
The certificate: The FAA in the United States and the STA in Slovakia are the two aviation authorities that oversee and regulate air travel in their respective nations.
Among other things, these agencies are responsible for approving new vehicles for flights with CoAs. The AirCar underwent 70 hours of flight testing, including more than 200 takeoffs and landings, to obtain its certificate in Slovakia.
According to a news statement from Klein Vision, the vehicle’s Slovakia-based manufacturer, “the difficult flight tests comprised the complete spectrum of flight and performance maneuvers and revealed an astounding static and dynamic stability in the airplane mode.”

Changing from a car to an airplane just takes 2 minutes and 15 seconds.
Why it matters: The certificate allows the AirCar to travel across the EU since Slovakia satisfies the airworthiness requirements established by the European Union Aviation Safety Agency (EASA).
With certification anticipated in roughly a year, Klein Vision may now focus on creating a production vehicle of the AirCar.
According to creator Stefan Klein, “AirCar certification opens the way for mass manufacture of incredibly efficient flying automobiles.” We have finally and officially proven that we can revolutionize long-distance travel.

The big picture: Electric vertical takeoff and landing (eVTOL) vehicles, which take off and land like helicopters, have received a lot of attention lately when it comes to flying automobiles. 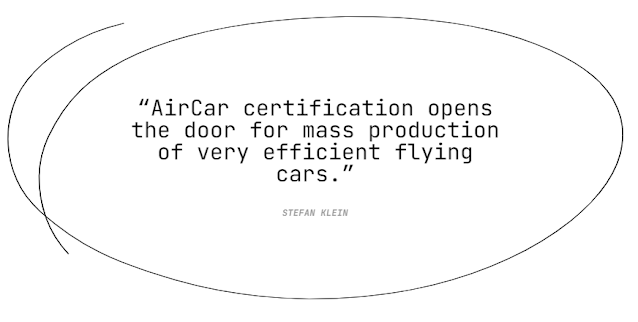 These kinds of aircraft, which can take off from parking lots, roofs, or even driveways, may be beneficial for moving people throughout cities. The AirCar can only travel in certain areas since it still requires a runway, much like a regular aircraft.
But it could be able to address the “last mile” transportation problem because you could drive it directly onto and off the runway. There is no need to drive to the airport, park, travel, and then rent a different vehicle once you arrive.

Many eVTOL prototypes are also made to fly on their own, with the goal of acting as airborne Ubers or Lyfts that can transport people without them needing any prior flying experience. For the AirCar, which can only be flown by a qualified pilot, that wouldn’t be the case.
Authorities would need to devise a way to control that airspace before new aircraft, autonomous or not, could begin flying over populated areas.

That still hasn’t happened in the EU, therefore the AirCar will probably be utilized like the majority of private aircraft, with pilots using it for short flights between airports or fun excursions.