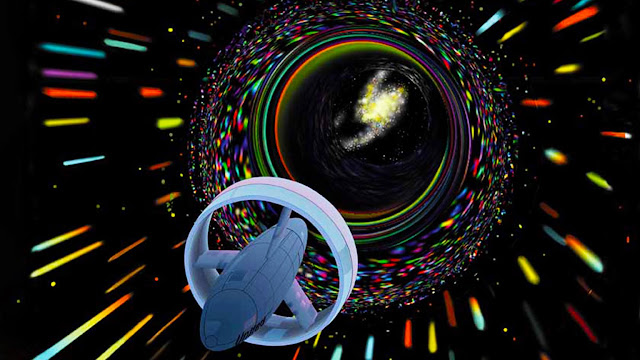 The Sun will exit the main sequence and become a red giant in around 5 billion years. Mercury, Venus, Earth, and possibly Mars will be consumed and destroyed as it expands and transforms into a glowering, demonic ball.

Is it possible for mankind to survive the Sun’s red giant phase? This existential threat may have previously been confronted by Extraterrestrial Civilizations (ETCs).

Could they have gotten away without using spaceships by relocating to another star system?

Universe The problems of interstellar travel are well-known among today’s readers. The Alpha Centauri system is our nearest neighboring solar system.

Even if mankind had to flee an existential threat in our Solar System and found a planetary home in Alpha Centauri, it would take more than four years to get there — assuming we could travel at the speed of light!

At our current technical level, getting an orbiter to Jupiter still takes five years. There’s a lot of chatter about generation starships, where humanity may dwell for generations on their way to a habitable planet far away.

Instead of traveling at near-light speed, entire generations of humanity would live and die on a voyage to another star that would take hundreds or thousands of years. It’s entertaining to consider, but it’s still pure imagination at this point.

Is there any other way for us, or other civilizations, to get out of our fatal situations?

ETCs may not require starships to escape existential risks and travel to another star system, according to the author of a new study published in the International Journal of Astrobiology.

Instead, they may employ rogue planets, or free-floating planets. “Migrating alien civilizations and interstellar colonization: implications for SETI and SETA,” according to the study. Irina Romanovskaya is the author. Romanovskaya is a Houston Community College physics and astronomy professor.

Romanovskaya states, “I suggest that alien civilizations exploit free-floating planets as interstellar transportation to reach, investigate, and colonize planetary systems.” These activities may also leave technosignatures and relics in the hunt for alien civilizations.

It’s feasible that rogue planets in the Milky Way or other billions of galaxies carry their own life in underground seas maintained warm by radiogenic disintegration.

If they collide with a star and become gravitationally bound, life has essentially utilized a rogue planet to move itself to a more favorable location. So, why can’t a civilisation do the same?

Free-floating planets are thought to be dark, cold, and unfriendly. Unless they have heated underground waters, that is. They do, however, have certain advantages.

Romanovskaya states, “Free-floating planets can provide continuous surface gravity, enormous quantities of space, and resources.” “Water as a consumable resource and protection from space radiation can be provided by free-floating planets with surface and underground seas.”

By directing the globe and producing energy sources, an evolved civilization may design the world for even greater advantage. If we’re on the edge of adopting controlled fusion, Romanovskaya thinks that sophisticated civilizations may already be doing it, which might transform a freezing rogue planet into something habitable.

The author describes four situations in which ETCs may use renegade planets to their benefit.

The first scenario involves a renegade planet passing through an ETC’s home world. The frequency with which this occurs is determined by the amount of rogue planets in general.

We don’t sure how many there are yet, but we know there are some. In 2021, a team of researchers revealed the finding of between 70 and 170 rogue planets in one area of the Milky Way, each the size of Jupiter. According to one research, there might be as many as 50 billion of them in our galaxy by 2020.

What is the source of all of them? Most are likely expelled from their solar systems as a result of gravitational processes, although others may originate through accretion in the same way as stars do.

Our Solar System’s Oort Cloud is another source of rogue planets. If additional systems contain similar clouds of objects, they might be a rich supply of rogue planets expelled by star activity.

“Stars of 1–7 times solar mass going through post-main-sequence development, as well as a supernova from a 7–20 times solar mass progenitor, can eject Oort-cloud objects from their systems, allowing them to become unbound from their host stars,” Romanovskaya adds.

But how frequently can an ETC, or our civilisation, hope to catch a ride on a renegade planet? According to a 2015 research, the binary star W0720 (Scholz’s star) travelled through the Oort Cloud in our Solar System some 70,000 years ago.

While that was a star rather than a planet, it demonstrates that things pass near by. If the studies predicting billions of free-floating planets are true, some of them traveled near by or straight through the Oort Cloud long before humans had the technology to identify them.

Although the Oort Cloud is a great distance away, a highly evolved civilisation may be able to detect a rogue planet coming and go out to meet it.

In the second scenario, technology is used to guide a renegade planet closer to a civilization’s home. They could chose an object from their own Oort Cloud – if they have one – and employ a propulsion system to send it towards a safe orbit around their planet if they had enough technology.

They may alter the item to their purposes with enough advance time, for example, by creating subterranean shelters and other infrastructure. They might be able to change or create an atmosphere with enough technology.

The third situation is quite similar to the first. It also involves a body from the civilization’s Solar System’s farthest reaches. Romanovskaya mentions our Solar System’s minor planet Sedna as an example.

“Civilizations capable of doing so would be sophisticated civilizations that had previously explored their planetary systems to distances of at least 60 AU from their home stars,” the author writes.

There are several issues that might arise. Bringing a dwarf planet from the furthest regions of the Solar System into the inner Solar System might cause all sorts of problems by disrupting the orbits of existing planets.

However, if a civilisation orbiting a post-main sequence star has already migrated outward with the shifting habitable zone, the threats are reduced. In her paper, Romanovskaya goes into further depth on the energy necessary and the time requirements.

The fourth scenario also includes Sedna-like things. When a star departs from the main sequence and expands, a critical distance is reached beyond which objects are expelled from the system rather than remaining gravitationally linked to the dying star.

If an ETC could predict when these things would be expelled as rogue planets, they might plan ahead of time and ride them out of the dying solar system. This might be quite dangerous, as times of violent mass loss from the star pose a significant risk.

The renegade planet or other body isn’t a permanent residence in any of these circumstances; it’s only a lifeboat.

“Free-floating planets may not function as a permanent route of escape from existential risks in any of the above situations,” the author argues. “Such planets eventually fail to support seas of liquid water (assuming such oceans exist) due to diminishing heat output in their interiors.”

Planets that are free-floating are also isolated and have less resources than planets that are part of a solar system. For example, there are no asteroids to mine and no free solar energy. There are no seasons or night and day in this world. Plants, animals, and even microbes do not exist. They’re nothing more than a means to an end.

“As a result, alien civilizations would employ free-floating planets as interstellar transportation to reach and colonize other planetary systems, rather than making them their permanent homes,” Romanovskaya adds.

Professor Romanovskaya speculates on where this may lead in her essay. She imagines a civilisation that accomplishes this several times, not to escape a dying star, but to populate a galaxy.

“In this fashion, the parent civilization can produce distinct and autonomous daughter civilizations on other planets, moons, or space areas.”

“A Cosmic Hitchhiker society would operate as a ‘parent-civilization,’ distributing the seeds of ‘daughter-civilizations’ in the form of its colonies in planetary systems,” she writes. “Both biological and post-biological species are affected.”

Humanity is still in the early stages of safeguarding itself against devastating asteroid strikes, and we haven’t figured out how to control our planet’s temperature. As a result, the idea of exploiting renegade planets to keep humankind alive appears far-fetched. However, Romanovskaya’s study is focused on discovering alien civilizations, not on us.

All of this activity might result in the creation of technosignatures and artifacts that would indicate the existence of an ETC. The study paper explains what they may be and how we can spot them. Technosignatures like as electromagnetic emissions or other phenomena might be created if rogue planets are exploited as lifeboats.

Solar sails might be used by an ETC to govern a rogue planet or by a spaceship launched from a rogue planet after it has arrived at its objective. In any scenario, solar sails emit cyclotron radiation, which is a technosignature.

“… cyclotron radiation induced by the interaction of the interstellar medium with the magnetic sail” might result from maneuvering a spaceship or a rogue planet using solar sails.

Infrared emissions might be unevenly distributed throughout the planet’s surface, revealing underlying engineering or technology. A technosignature might also be an uncommon blend of different wavelengths of electromagnetic radiation.

Technosignatures may potentially be found in the atmosphere, assuming one existed. It might include traces of terraforming, depending on what was discovered.

Astronomers don’t know how many rogue planets there are or if they’re concentrated in certain parts of the galaxy for the time being. When it comes to figuring these things out, we’re just getting started. However, we may soon have a better idea.

By 2023, the Vera Rubin Observatory should be up and running. Every few evenings, this powerful observatory will picture the whole accessible sky in great detail. It has the world’s biggest digital camera, with a 3.2 GB CCD.

The Vera Rubin will be particularly adept at detecting transients, or changes in location or brightness over the course of a few days. It’ll have a decent probability of detecting any unwanted visitors, such as rogue planets, approaching our Solar System.

There’s a good chance that some of those rogue planets may emit strange emissions or display strange behaviors. Scientists will most likely be perplexed by them, as they were by Oumuamua.

Perhaps a more evolved society than ours has previously confronted an existential threat from a fading star. Maybe they went to great lengths to capture a renegade planet and modify it to suit their purposes.

Perhaps they’ve already boarded it and shot it for a nearby, stable, long-lived yellow star with rocky planets in its habitable zone. Maybe they’re wondering if their destination has any life and how they’ll be accepted after their long travel.