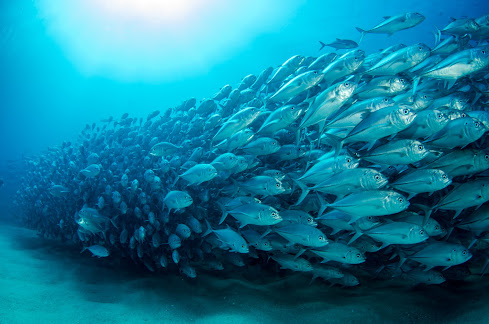 Large fish in the open sea have declined by at least 90 percent over the past century due to overexploitation.

Scientists suggest that we need to conserve tuna, swordfish, and marlin movement superhighways known as ‘blue corridors’ to bring them back from the edge. Using a fish’s natural urge to return to its origin, a new research in the Pacific Ocean identified the busiest of these underwater transportation arteries.

This is referred to as philopatry, or natal homing, and it isn’t simply a salmon-related activity.

Other fish species return to their birthplaces to breed, and scientists want to utilize this knowledge to determine where fishing should be restricted or prohibited.

It’s extremely difficult to track giant fish as they swim over enormous swaths of water, so scientists don’t know much about migratory pathways on the high seas.

However, if certain fish are thought to return to their breeding areas, their movements should produce an annual loop across specific portions of the ocean.

Researchers from the University of British Columbia identified the migratory loops of 11 fish species in the Pacific Ocean by comparing data on where fish are captured the most and where fish breed.

The findings are very preliminary and dependent on various assumptions, but they give valuable information on where fish may be swimming at different times of the year.

When all of the migration routes are placed on a map, the overlap exposes multiple conservation sites that are “high priority” or “very high priority.”

The final map, which shows which parts of the Pacific should be protected first, is shown below. The red and orange patches on the map reflect ocean locations visited by all or almost all of the fish species studied.