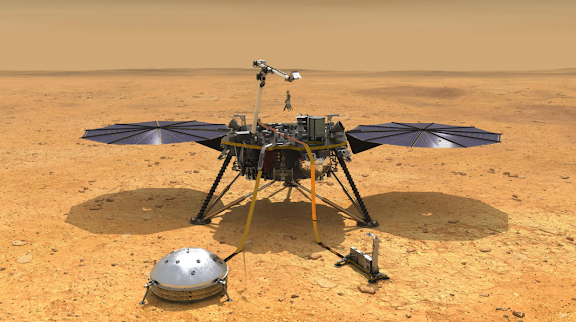 Due to a declining power supply, the InSight Mars lander will discontinue science operations in the next months, mission officials revealed at a press briefing on May 17.
The amount of power generated per Mars day or sol has been reduced to around 500 watt-hours due to Martian dust coating the solar panels. The solar panels on InSight produced roughly 5,000 watt-hours per sol when it was launched in November 2018.
“At the end of the calendar year, we do anticipate having to conclude all InSight operations,” Kathya Zamora Garcia, InSight’s deputy project manager, said at the briefing. “Not because we want to turn it off but unfortunately we don’t have the energy to run it.”
However, InSight’s mission will have lasted nearly twice as long as expected (four Earth years instead of the intended two), and it will have detected more than 1,300 marsquakes during its career.
The lander recently recorded its largest marsquake to date, as well as the largest quake ever detected on another world: a magnitude 5 quake. The mission gathered unparalleled information about the structure and interior of Mars.
“One of InSight’s legacies is that it really proves the technique of seismology for planetary science,” stated Bruce Banerdt, InSight Principal Investigator, during the press conference. “We’ve been able to map out the inside of Mars for the first time in history.”
“InSight has transformed our understanding of the interiors of rocky planets and set the stage for future missions,” said Lori Glaze, NASA’s Planetary Science Division director. “We can apply what we’ve learned about Mars’s inner structure to Earth, the Moon, Venus, and even rocky planets in other solar systems.”
The solar panels on InSight are becoming increasingly covered in Martian dust.
The team has hoped expecting a dust devil to rid the panels of dust, as it did with the Spirit and Opportunity Mars rovers. Unfortunately, no such luck. The inventive engineering team, on the other hand, took matters into their own hands, or robotic arm.
They used the magnetic properties of Mars dust, which is charged with static electricity, to clean the panels on windy days. InSight was told to scoop up Martian soil and place it on the solar panels’ edges, causing the existing dust on the panels to attract the new dust.
According to Garcia, this smart method increased InSight’s energy generation by around 5% each time, and the maneuver was successful six times.
As Mars enters winter, more dust will be aloft in the atmosphere and less sunlight will be available, the dust collection will likely worsen. 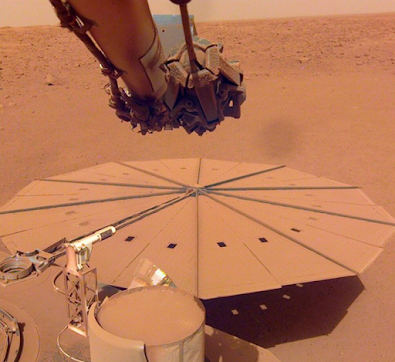 Due to the diminished power, the lander’s robotic arm will be placed in its resting posture (called “retirement pose”) for the final time later this month (see image above).
According to the team, if just 25% of InSight’s panels were blown away by the wind, the lander would gain around 1,000 watt-hours every sol, which would be enough to keep gathering data. InSight’s non-seismic instruments, on the other hand, will rarely be turned on after the end of May, given the present pace of power decline.
Now, they are prioritizing power for the lander’s seismometer, which will operate at select times of day, such as at night, when winds are low and marsquakes are easier for the seismometer to “hear.” They expect the seismometer to be shut off by the end of the summer, bringing the mission’s science phase to a close.
By that time, InSight might be powerful enough to take pictures and communicate with Earth. However, the team anticipates that by December, power will be so low that InSight will just stop responding.