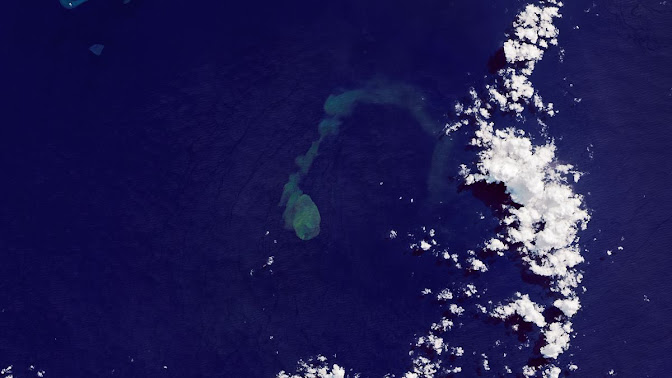 Sharks have long called Kavachi Volcano, an active undersea volcano in the Solomon Islands, home. Their once-peaceful playground in the southwest Pacific Ocean, however, has suddenly become a little less tranquil.
NASA satellite photographs have recently revealed plumes of discolored water over the volcano, which are telltale evidence of volcanic activity and suggest many eruptions. According to the Smithsonian Global Volcanism Program, the photos were taken by the Operational Land Imager-2 (OLI-2) onboard the Landsat-9 satellite.
“You’ve heard of sharknado, now get ready for sharkcano,” NASA’s Goddard Space Flight Center in Greenbelt, Maryland, tweeted over the weekend.
Kavachi is also “one of the most active submarine volcanoes in the Pacific,” according to the tweet.
According to a statement provided by NASA’s Earth Observatory, researchers noted variations in water color above the volcano in April and May, and the volcano likely began erupting as early as last October. Prior to it, the volcano’s most recent major eruptions were in 2014 and 2007.
The National Oceanic and Atmospheric Administration (NOAA) discovered that particulate particles, volcanic rock fragments, and sulfur are commonly present in the volcano’s plumes of warm, acidic water, the latter of which “attracts microbial communities that thrive on sulfur.”
Despite the region’s stormy past, scientists were startled to learn that the volcano’s crater also happens to be home to two varieties of sharks — hammerheads and silky sharks — during a 2015 study excursion to Kavachi.
The presence of sharks in the crater sparked “new questions about the ecology of active submarine volcanoes and the extreme environments in which large marine animals exist,”    according to a 2016 paper in the journal Oceanography titled “Exploring the Sharkcano.”
The top of Kavachi is roughly 65 feet (20 meters) below sea level, with its base spanning 0.75 miles over the seafloor (1.2 kilometers). The volcano is about 15 miles (24 kilometers) south of Vangunu Island, one of more than 900 islands that make up the Solomon Islands archipelago and were developed in a tectonically active area. Residents of nearby islands have reported seeing steam and ash on the water’s surface on a regular basis, indicating that the so-called sharkcano is still active beneath the surface.