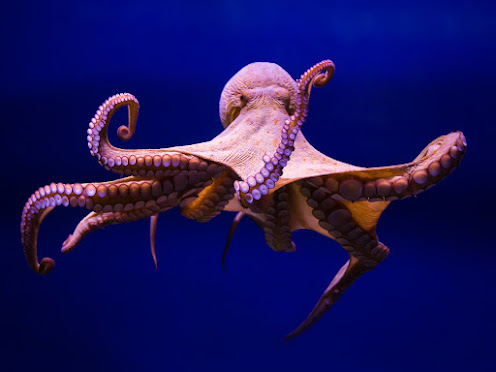 Brained arms, color-shifting camouflage, escape ingenuity, and puzzle-solving ability are just a few of the brilliant qualities that squishy cephalopods have. Squid, octopus, and cuttlefish (coleoid) genomes have been discovered to be as bizarre as the animals themselves, according to new research.
The cephalopod genome “is incredibly churned up,” says developmental biologist Caroline Albertin, who conducted one of two recent studies revealing unusual genetic twists in these cephalopods’ history.
Albertin and colleagues sequenced the genomes of three soft-bodied cephalopods in a massive effort: the California two-spot octopus (Octopus bimaculoides) – the first octopus to have its genome sequenced back in 2005; the Atlantic longfin inshore squid (Doryteuthis pealeii) – studied as a model system for neuroscience for nearly a century; and Hawaiian bobtail squid (Euprymna scolopes) – a model animal for bacteria-animal symbiosis.
The researchers discovered a slew of new gene families, many of which are expressed in the squid brain, as well as expansions in existing gene families, such as clusters of genes involved in cephalopod color change, suckers, and beaks.
Protocadherin genes, which may be important in the development of sophisticated neural systems in both humans and cephalopods, are another unusual gene expansion. Cephalopods, on the other hand, promote variation in this gene by having many copies of it.
Cephalopod genomes grew in size as a result of these copies, with the Doryteuthis genome being 1.5 times larger than ours and the California two-spot octopus genome being 90 percent larger.
Our genomes, on the other hand, became larger through a process known as whole genome duplication, which is attributed with our increased complexity and ability to generate new evolutionary traits. Cephalopods appear to have gone through comparable large-scale modifications, but they’ve added their own flavor to everything they do.
“We now know that the evolution of soft-bodied cephalopods involved similarly massive genome changes, but the changes are not whole-genome duplications but rather immense genome rearrangements, as if the ancestral genomes were put in a blender,” says University of Chicago neurobiologist Clifton Ragsdale.
This genetic shuffle may have bestowed amazing cognitive powers on these peculiar marine beasts, as well as the biggest neural systems of any invertebrates. The estimated 500 million neurons that octopuses have between their arms and heads are comparable to that of dogs.
Finally, there’s the cephalopod’s well-known capacity to modify their own brain genes.This messenger RNA editing ability occurs in only a handful of important nervous system proteins in humans, in less than 1 percent, but in cephalopods, it is far more widespread.
Mutations in an animal’s DNA blueprints usually cause changes to its structure. The messenger RNA, which builds proteins, is the one who makes the alterations in this scenario. There’s some evidence that this skill helps cephalopods to adapt more quickly to their surroundings, with the builder being able to improvise to fit new conditions, although this isn’t proven.
Albertin and her colleagues discovered that the animals’ RNA editing is divided into two categories: neural and non-neural modifications. Not only do alterations occur in various tissues, but the frequency with which they occur varies drastically, with nervous system editing occurring far more frequently, implying that it is vitally crucial to how these animals operate.
In the 300 million years since squid and octopus last shared a common ancestor, these odd systems have all contributed to the creation of the extraterrestrial intelligences we now admire. We’re excited to see what else their peculiar genomes disclose.