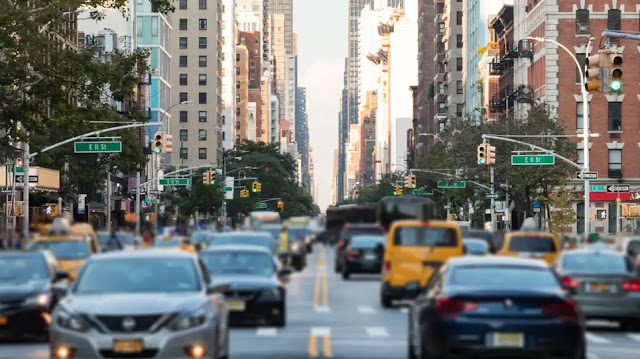 All new vehicles sold in the state must be zero-emission vehicles by 2035. The adjustment will probably hasten the increase in electric car sales.

New York is taking extreme measures to reduce greenhouse gas emissions, treading in the footsteps of California. By 2035, the Empire State will outlaw the purchase of any new petroleum-powered vehicles.
“Our initiatives are encouraging New Yorkers, local governments, and companies to switch to electric cars via ongoing state and federal funding. In a statement announcing the new policy order, Governor Kathy Hochul stated, “We’re driving New York’s transition to clean transportation ahead. Today’s news will benefit our environment and the health of our communities for decades to come.

The legislative move will bring New York one step closer to its state-wide target of 85% carbon reductions from 1990 levels by 2050.

According to the 2021 statewide report, transportation was responsible for 28% of all greenhouse gas emissions in New York, putting 106.92 million metric tons of carbon dioxide and other pollutants into the atmosphere in a single year. If the power system also switches to renewable energy sources, switching to electric cars should considerably cut those emissions.
Hochul arrived in a Chevy Bolt for a news conference in White Plains on Thursday morning, when she outlined the strategies for a gas-free New York in the future. The regulation will become effective over time.

The first requirement is that 35% of all new light-duty cars sold in the state by 2026 must be electric. The percentage will then increase to 68% by 2030 and reach 100% by 2035. Along with the EV regulations, new emission criteria for gas-powered cars built between 2026 and 2034 are also specified.
By 2035, New York will have an all electric school bus fleet, and further initiatives in this vein include enhanced financial aid for both private buyers and municipalities interested in purchasing EVs. The Drive Clean Rebate program, which provides an incentive of up to $2,000 (on top of the federal tax rebate of up to $7,500) to encourage and aid people in purchasing electric automobiles, will get an additional $10 million from the state. According to Hochul, New York has already distributed more than 78,000 reimbursements around the state.

“You have no more justifications” not to purchase an EV, Hochul declared. “We are no longer traveling down that empty road [of gas-powered automobiles].” Although the initial expenses of buying an EV are still very high, these prices are declining, and some analyses have concluded that, over time, electric cars are less expensive to purchase and operate than their gas-powered equivalents.
In August, California passed a similar law, but Hochul wasn’t satisfied to let the West Coast have all the glory. The governor emphasized that in 2021, she signed the gas-ban goal. However, she noted, “there was some federal mandate that California had to go first—the that’s one time we’re letting them go first.” As a result, she “had to wait for California to take a step.”
Along with lowering CO2 emissions, moving to electric vehicles (EVs) might have positive effects on public health across the state. In a news conference on Thursday, State Senator Pete Harckham stated that Westchester is a non-attainment zone for the Clean Air Act, underlining the advantages of reducing combustion cars in the area. Air pollution is harmful and fatal. And one of the biggest pollutants in New York is automobile exhaust.

The declaration from New York is encouraging at a time when we urgently need to see a decline in the use of fossil fuels and gas-powered vehicles. Unfortunately, personal EVs aren’t always the best solution. Unanswered concerns surround how the current availability of essential substances like lithium, copper, and rare earth metals will be able to satisfy the escalating demand. And even if they are less urgent than climate change itself, all that mining has its own environmental implications. Sadly, Hochul’s announcement included no mention of extra state funds for increased public transportation.