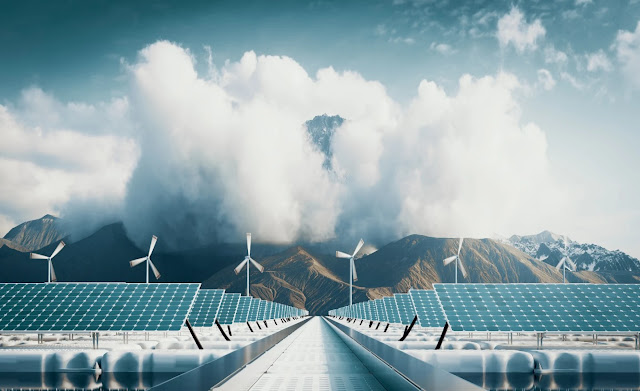 Unprecedented fuel price hikes, energy extortion between nations, up to 7 million air pollution-related fatalities annually, and a slew of climate-related catastrophes are all happening at once throughout the world. Critics claim that switching to renewable energy would exacerbate these issues by causing unstable electrical systems and raising costs. A recent analysis from my research team at Stanford University, however, found that these issues can be resolved in each of the 145 nations we looked at without blackouts and at a reasonable cost utilizing practically all currently available technology.
The study finds that these issues may be resolved without the use of miraculous technology. We can produce secure, affordable, and reliable energy everywhere by electrifying all energy sectors, generating electricity from clean, renewable sources, converting that electricity into heat, cold, and hydrogen, storing that electricity, heat, cold, and hydrogen, expanding transmission, and rescheduling some electricity use.

A clean, renewable energy system consumes a lot less energy than a combustion-based energy system, which is the main factor for the cost decrease. In reality, an all-electric system fueled by clean, renewable sources reduces the amount of energy that people actually need by almost 56% globally. The drop is due to five factors, including the efficiency of electric cars compared to combustion vehicles, the effectiveness of electrified industries, the elimination of the energy required to produce fossil fuels, and efficiency gains that went above and beyond expectations.
Additionally, a new method lowers the price per unit of energy by an additional 12% on average, bringing global energy costs down by 63 % annually. Energy expenses + health costs plus climate costs added together result in a 92 percent decrease in societal costs as compared to the existing system.
Only onshore and offshore wind electricity, solar photovoltaics for electricity on rooftops and in power plants, concentrated solar power, solar heat, geothermal electricity and heat, hydroelectricity, along with small amounts of tidal and wave electricity are taken into consideration as energy-producing technologies. Batteries were the most crucial kind of electricity storage that was taken into account, although pumped hydroelectric storage, existing hydroelectric dam storage, and concentrated solar power storage were all included. We discovered that no batteries with a storage capacity of more than four hours were required. Instead, by connecting batteries with four hours of storage together, long-duration storage was achieved. In a sensitivity analysis, we discovered that overall costs would only increase by 3.2% above their base estimate even if battery prices were 50% higher.
We also took into account the seasonal heat storage beneath the soil as well as the temporary heat storage beneath water tanks. District heating can benefit from seasonal heat storage. With district heating, heat is generated and stored centrally before being conveyed through hot water to buildings for the purpose of heating both the air and the water. Using heat pumps in each building is an alternative to district heating. The study discovered that the availability of district heating made it simpler and more affordable to maintain the stability of the electric grid since it eliminated the requirement for batteries to immediately power heat pumps. Batteries are more costly than heat storage in the earth.
According to our research, it would cost over $62 trillion to replace all of the energy used in the 145 nations that account for 99.7% of global carbon dioxide emissions. However, the payback period for the new system is shorter than six years because of the $11 trillion in yearly energy cost reductions.

The new system may also result in the creation of nearly 28 million more long-term, full-time employment than are lost globally and the need for only 0.53 percent of the world’s land, the majority of which will be vacant space between wind turbines on land with multiple uses. As a result, we discovered that the new system may use less energy, be cheaper, and generate more employment than the old one.

Another intriguing discovery was that, in a system powered entirely by renewable energy, charging battery-electric vehicles during the day was less expensive for the grid than charging them at night since day charging complemented solar electricity output effectively.
The study “tells us that for the 145 nations investigated, energy security is within reach, and more significantly, how to acquire it,” according to Anna von Krauland, a Stanford Ph.D. student who participated in the study.

It’s crucial to emphasize that we excluded technologies that didn’t tackle energy security, global warming, and air pollution all at once. Bioenergy, natural gas, fossil fuels, bioenergy that captures carbon dioxide, direct air capture of carbon dioxide, blue hydrogen, and nuclear power were not included. We came to the conclusion that these technologies are unnecessary and offer less advantage than the ones we did.

Finally, our research suggests that each nation should convert to 100% clean, renewable energy by 2035, and at the latest by 2050, with an 80 percent shift taking place by 2030.