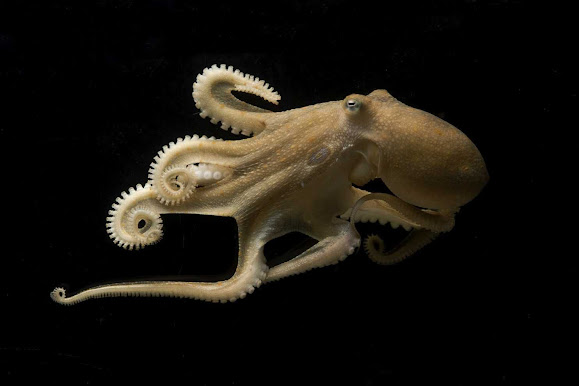 Many animal species die after they reproduce. But in octopus mothers, this decline is particularly alarming:  When an octopus mother’s eggs are near to hatching, she stops feeding in most species. She suddenly abandons her protective huddle over her children and turns on herself. She could thrash herself against a rock, tear at her own flesh, and even devour her own arms.
Researchers have now identified the molecules that appear to regulate this deadly frenzy. After an octopus produces eggs, her body adjusts its cholesterol synthesis and utilization, which leads to a rise in steroid hormone production – a biochemical shift that will doom her. According to Z. Yan Wang, an assistant professor of psychology and biology at the University of Washington, some of the alterations might point to processes that underlie longevity in invertebrates in general.
“Now that we have these pathways, we’re really interested to link them to individual behaviors, or even individual differences in how animals express these behaviors,” Wang told Live Science.

Wang was fascinated by female reproduction even as an English major in college. She continued that interest when she went to graduate school for science and was moved by the tragic deaths of octopus moms after they produced their eggs. No one knows why the conduct is taking place. The mother’s body sends nutrients into the water that nourish the eggs, according to some theories. The die-off, according to Wang, is most likely protecting the newborns from the elder generation. Octopuses are cannibalistic, she explained, and if older octopuses stayed, they may consume each other’s young.

The mechanism behind this self-destruction was discovered in the optic glands, a collection of glands behind the octopus’s eyes that is approximately analogous to the pituitary gland in humans, according to a 1977 research by Brandeis University psychologist Jerome Wodinsky. Wodinsky discovered that if the optic gland nerves were severed, the mother octopus will forsake her eggs, resume feeding, and survive for another four to six months. For organisms that only survive around a year, that’s an astonishing life extension.

However, no one knew what the optic gland was doing to keep this self-injury cycle in check.

“From the very beginning, I was really keen to do the experiments that we outlined in the paper we just published, which is essentially juicing the optic gland and then identifying the components of that juice,” Wang explained.

Wang and her colleagues looked at the compounds released by California two-spot octopuses (Octopus bimaculoides) after they lay eggs in their optic glands. In 2018, a genetic investigation of the same species revealed that following egg-laying, the genes that create steroid hormones (which are made up in part of cholesterol components) in the optic glands went into overdrive. The scientists concentrated on the steroids and associated compounds generated by the two-spot octopuses’ optic glands, using that work as a reference.

Three chemical alterations happened around the time the octopus mother produced her eggs, according to the researchers. The first was an increase in pregnenolone and progesterone levels, two hormones linked to reproduction in a variety of animals (in humans, progesterone rises during ovulation and during early pregnancy). The second round of changes was more unexpected. Higher quantities of 7-dehydrocholesterol, or 7-DHC, were produced by the octopus moms. Humans also create 7-DHC as part of the cholesterol-making process, but they don’t store it for long since it’s harmful. In fact, children with Smith-Lemli-Opitz syndrome are unable to remove 7-DHC. The result is intellectual disability, behavioral issues such as self-harm, and physical anomalies such as extra fingers and toes and cleft palate are the outcome.
Finally, the ocular glands began creating more bile acid components, which are acids produced by the liver in humans and other animals. Although octopuses lack the same bile acids as humans, they appear to produce the building blocks for those acids.
“It suggests that it is a brand new class of signaling molecules in the octopus,” Wang added.
The bile acid components are noteworthy, according to Wang, since a similar mix of acids has been proven to influence the lifespan of the Caenorhabditis elegans worm, which is often utilized in scientific study due to its simplicity. It’s possible that the bile acid components are vital for invertebrate lifespan, according to Wang.
Octopuses are difficult to study in captivity because they need a lot of room and ideal conditions to reach sexual maturity and reproduce. Wang and other octopus researchers have now devised a method for keeping the smaller Pacific striped octopus (Octopus chierchiae) alive and reproducing in the laboratory. Pacific striped octopuses, unlike most other octopus species, may mate many times and rear multiple clutches of eggs. They don’t self-destruct as their eggs prepare to hatch, making them ideal examples for research into the origins of the bizarre behavior.
“I’m really, really excited to study the dynamics of the optic gland in that species,” Wang remarked.