A lineage of armored dinosaurs previously unknown to science may be represented by the fossils of a tiny, prickly dinosaur that was recently found in South America.
Jakapil kaniukura, a recently found species, resembles a primitive relative of dinosaurs with armor like Ankylosaurus or Stegosaurus, although it originated from the Cretaceous, the final period of the dinosaurs, and lived between 97 million and 94 million years ago.
According to a recent research, paleontologists discovered a vast lineage of armored dinosaurs that thrived in the Southern Hemisphere but had never before been discovered.

J. kaniukura presumably grew to be approximately 5 feet (1.5 meters) long, weighed roughly the same as a domestic cat, and possessed a row of defensive spines extending from its neck to its tail. Its plant-eating teeth resembled those of Stegosaurus and were fashioned like leaves.

In the region of Rio Negro in northern Patagonia, paleontologists from the Félix de Azara Natural History Foundation in Argentina discovered a portion of a subadult J. kaniukura’s skeleton.

The dinosaur probably had a small beak that could deliver a powerful bite and walked erect. The researchers wrote about their findings in the journal Scientific Reports on Thursday, August 11. It presumably would have been able to consume hard, woody plants.

The new dinosaur belongs to a class of dinosaurs called Thyreophora together with Stegosaurus, Ankylosaurus, and other armor-backed dinosaurs. 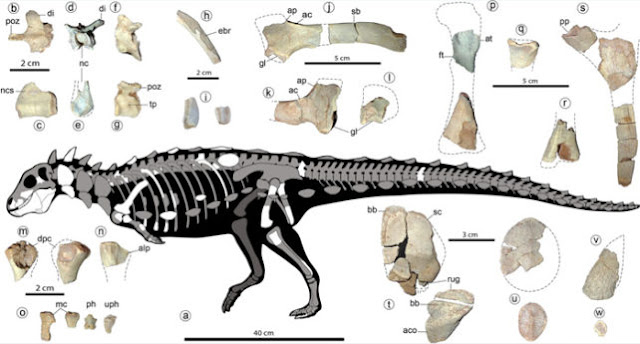 The majority of thyreophorans are known from the Northern Hemisphere, and the oldest fossils from this group are generally discovered in rocks from North America and Europe that date from the Jurassic period, between about 201 million years ago and 163 million years ago.

According to paleontologists from the University of Pas Vasco and the Félix de Azara Natural History Foundation as well as Facundo J. Riguetti and Sebastián Apestegua, the finding of J. kaniukura “shows that early thyreophorans had a far greater geographic range than previously imagined.”
The fact that this old lineage of thyreophorans continued to exist in South America until the Late Cretaceous was also unexpected, they said.
These more primitive thyreophoran species appear to have vanished from the Northern Hemisphere by the Middle Jurassic.
However, they reportedly continued to exist on the southern supercontinent Gondwana far into the Cretaceous. (Later thyreophorans had a longer lifespan. For instance, Ankylosaurus perished 66 million years ago together with the rest of the nonavian dinosaurs.)
The term “Jakapil” in the Puelchean or northern Tehuelchean Indigenous language of Argentina means “shield bearer,” hence the name. The term “Kanikura” is derived from two words in the indigenous Mapudungun language that mean “crest” and “stone.”
Thanks to this computer simulation created by Chilean paleoartist and Ro Negro National University student Gabriel Dáz Yantén, you can see what J. kaniukura would have looked like in its prime.