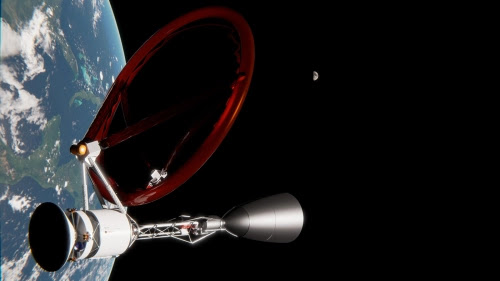 We need a quick means to get supplies to the planet while avoiding dangers along the route if humanity are to maintain a long-term Mars settlement.
According to scientists, a voyage to Mars using our existing rockets would take over seven months, which is too long for easily supporting a continuous human settlement, in NASA’s opinion.
Therefore, new research from McGill University has suggested a solution that will shorten that journey to just 45 days. All you need to do is board a massive laser.
The problem: Recently, there has been a lot of talk about Mars thanks to the Mars Rover Perseverance, Lockheed Martin’s new Mars ascent vehicle, and several people preparing to live there. Undoubtedly, scientists have their sights set on it, and a crewed Mars expedition may soon be feasible.
“Creating such a system has no significant obstacles,”

However, getting people there is one thing. Another is keeping a colony there.

A human base on Mars would require frequent replenishments of supplies, including food, equipment, replacement parts, and anything else needed for human existence that is not available on the planet. NASA also thinks it takes too long for ships to go from Earth to our neighboring planet—seven months, to be exact.
To considerably lessen exposure to galactic cosmic rays and solar storms, we must drastically shorten that distance traveled. According to Phys.org, NASA issued a challenge to all engineers: come up with a technique to send a payload to Mars that weighs at least 1,000 kilograms (2,200 lbs on Earth), which is comparable to, in less than 45 days.
Emmanuel Duplay, the study’s principal author, told Phys.org that “when more humans undertake the journey to support a long-term colony, we will require propulsion technologies that get us there faster—if only to escape radiation threats.”
Launch: To power an orbiting spacecraft in a race to Mars, the team plans to use a 10-meter-wide laser array on Earth. The suggested laser would provide an Earth-based force powerful enough to move a spacecraft without bringing bulky fuel into orbit.
The laser would heat hydrogen plasma within the spaceship to provide such a force. The ship would then be propelled toward Mars at a high speed by the superheated hydrogen gas.
The concept, which they discussed in a study published in the journal Acta Astronautica, may allow for the rapid delivery of humans and supplies to a Mars colony in comparison to the time required by rockets.
Laser arrays the size of a volleyball court may be used for speedy transport missions of 1 ton, according to Duplay.
The team also suggests doing away with the requirement for chemical propellants, which are typically used to slow and halt the spacecraft after landing, in order to further reduce the ship’s weight. According to Futurism, it would instead use Mars’ atmosphere as a “aerobrake” to decelerate the spacecraft.
The next stages involve overcoming the engineering difficulties of a laser-powered thruster, Duplay told Freethink, “now that we established there are no fundamental hurdles in constructing such a device.” “We want to ultimately develop a small-scale prototype,” the researcher said. “We are currently preparing an experiment to explore some of the heat transmission elements of this system.”
According to Verve Times, Duplay predicts that a laser-thermal journey to Mars might leave Earth 10 years after the start of the first human expeditions to the planet, or around the middle of the 2040s.

“In my lifetime, I genuinely hope to witness humankind exploring and settling other planets in the solar system. This initiative is focused on just that. In addition to long-term scientific and economic activities in space, laser-thermal propulsion is a technique that might possibly fuel a future solar system economy, according to Duplay.