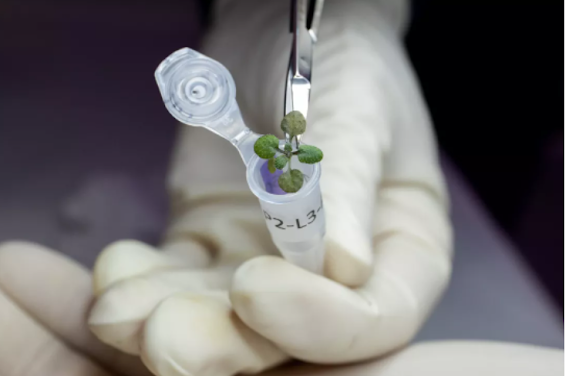 When the Artemis program (hopefully) sends people to the Moon in a few years, there will be significant logistical challenges in keeping such delicate creatures alive in such a hostile environment.
Not to mention the food issue. Although space organizations engaged in the International Space Station are well-versed in delivering pre-packaged foods, there are health benefits to having access to fresh food.
It would be incredible if lunar dirt could be used to grow fresh crops. So a team of scientists tried to cultivate plants – particularly, thale cress, or Arabidopsis thaliana – using a few precious grams of genuine lunar materials acquired during the Apollo missions.
“For future, longer space missions, we may use the Moon as a hub or launching pad. It makes sense that we would want to use the soil that’s already there to grow plants,” says Rob Ferl, a horticultural scientist of the University of Florida.
“So, what happens when you grow plants in lunar soil, something that is totally outside of a plant’s evolutionary experience? What would plants do in a lunar greenhouse? Could we have lunar farmers?”
Well, spoiler: Moon soil, commonly known as lunar regolith, isn’t very conducive to plant growth. However, this study is only the first step toward the thrilling prospect of one day cultivating plants on the Moon.
Because the present quantity of lunar sample material on Earth is so little, it is expensive and coveted.
After three petitions spanning 11 years, Ferl and his colleagues, University of Florida horticultural scientist Anna-Lisa Paul and geologist Stephen Elardo, were given a loan of just 12 grams of the rare metal.
This required a very small, highly controlled experiment — an Arabidopsis mini-garden. They split their samples into 12 thimble-sized pots, each with a nutritional solution and a few seeds.
Seeds from control groups were planted in terrestrial soil from harsh settings, as well as soil simulants (a terrestrial material used to simulate the properties of extraterrestrial soils).
The scientists employed a Mars soil simulator and a JSC-1A lunar simulator in the experiment. This is significant since prior research has shown that plants can thrive in both types of simulants, but minor changes might indicate that the real thing is a different story.
That certainly appears to be the case. Almost all of the seedlings put in the lunar materials grew, much to the amazement of the researchers, but that’s when things went wrong. Rather than flourishing, the seedlings seemed to be smaller, slower-growing, and more variable in size than those produced in the lunar simulant.
The scientists discovered why when they removed the plants for genetic study.
“At the genetic level, the plants were pulling out the tools typically used to cope with stressors, such as salt and metals or oxidative stress, so we can infer that the plants perceive the lunar soil environment as stressful,” Paul adds.
“Ultimately, we would like to use the gene expression data to help address how we can ameliorate the stress responses to the level where plants – particularly crops – are able to grow in lunar soil with very little impact to their health.”
The researchers utilized lunar samples acquired by Apollo missions 11, 12, and 17 from three separate places on the Moon, at varied depths from the surface.
Surprisingly, this seemed to affect the plants’ ability to respond to the soil. Those from Apollo 11 that were planted in the soil closest to the surface fared worst; one plant even perished. This is the stratum of lunar regolith that is most damaged by cosmic rays and the solar wind.
Seeds placed in less exposed soil, on the other hand, fared considerably better, albeit not as well as plants growing in terrestrial volcanic ash. This knowledge might aid scientists in determining how to cultivate plants on the Moon and developing methods to make the lunar soil more plant-friendly.
But we’re not quite there yet. Before we can contemplate using Moon dirt to grow crops, further study into defining and optimizing the lunar soil for plant development is required. However, scientists now have a better idea of what they’re up against and what their next actions should be.
“We wanted to do this experiment because, for years, we were asking this question: Would plants grow in lunar soil,” Ferl explained. “The answer, it turns out, is yes.”