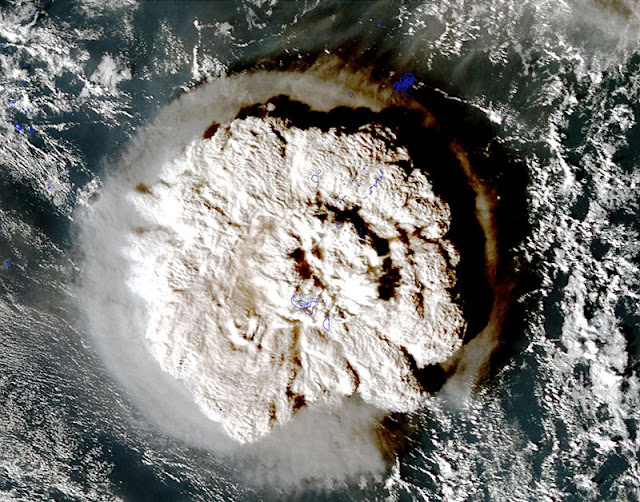 Krakatau, or Krakatoa, a mountainous island in Indonesia, self-destructed in August 1883. Episodic volcanic eruptions culminated in an explosion that hurled debris 80 kilometers into the air and engulfed 800,000 square kilometers of the Earth’s surface in corrosive ash. As much of the island shattered and splashed into the sea, a tsunami surged up and crashed into the neighbouring islands of Java and Sumatra, killing the majority of the 36,000 people killed in the eruption.

While Indonesia took the brunt of the destruction, the Krakatau eruption had global ramifications. Despite the fact that there appeared to be no way Krakatau’s tsunami could have leapfrogged from the Indian Ocean over continents and into other ocean basins, tiny tsunamis lapped at the shorelines of countries in both the Pacific and Atlantic seas. Scientists at the time attributed these far-flung tsunamis to coincidentally timed earthquakes since they had no other explanation.

However, geophysicists continued to puzzle with the data in future decades. A 1955 research, for example, discovered that the arrival of the pressure wave that travelled outward through the air from the eruption was connected with the arrival of distant tsunamis. The authors of the research thought that there was some form of link between the air disturbance and the water. Krakatau’s primary tsunami lagged behind minor tsunamis in areas like Hawai’i, California, and Alaska, which instead synced up with the quicker pressure wave from the blast, according to computer simulations from 2003. (A sound is a pressure wave with a frequency in the audible range.)

Scientists needed to see another version of Krakatau in real time in the current age to confirm the hypothetical concept that volcanoes’ sound or pressure waves may produce tsunamis – an inconvenient dream, to be sure.

Then, on January 15, 2022, a mostly submerged volcanic cauldron dubbed Hunga Tonga-Hunga Ha’apai in the South Pacific erupted in a terrifying scream. The archipelagic Kingdom of Tonga was destroyed by its mushroom cloud of ash and local tsunami. Despite the fact that it killed only a few people, this volcano set a number of records: It hurled debris two-thirds of the way into space, produced 200,000 lightning discharges per hour in its ash cloud, and was one of the most powerful explosions ever recorded.

The Tongan event was “essentially like Krakatoa 2” in terms of scale and intensity, according to Matthew Haney, a geophysicist at the United States Geological Survey’s Alaska Volcano Observatory. In Anchorage, where Haney is located, a gunshot-like crack could be heard. “We’re around 6,000 kilometers apart.” Is it possible that you may hear a volcanic eruption? Wow. That really boggles my mind.”

It wasn’t only the music of Hunga Tonga-Hunga Ha’apai that went across the world. A series of tens of centimeter-high tsunamis slammed against distant coastlines in several ocean basins. “That tsunami signal in the Caribbean was unexpected,” said Paul Fanelli, an oceanographer with the National Oceanic and Atmospheric Administration (NOAA).

This time, experts believe they’ve discovered the answer. When wave height gauges were linked with equivalent air pressure monitors all across the world, it became evident that the explosion’s pressure wave must have collided with the surfaces of many oceans and seas, transferring energy to the water, and causing a slew of tsunamis.

This solution also clarified a 139-year-old riddle surrounding Krakatau. “Given what was observed in 1883,” Greg Dusek, a physical oceanographer at NOAA, said, “it seems reasonable that it would have happened then as well.” “Both sets of observations appear to be in good agreement.”

However, as with any major scientific breakthroughs, new issues have arisen. When and why do the pressure waves of volcanoes dance with the waves of the ocean? Why did Tonga’s far-flung tsunamis only hit particular parts of the country? What is the potential for these tsunamis to become more powerful and destructive?

In order to create a tsunami, a large amount of mass must be pushed into a body of water. Earthquakes do this function in a basic manner. “Tsunamis from earthquakes are very, really basic,” said Emily Lane, a hydrodynamicist at the National Institute of Water and Atmospheric Research in New Zealand. “An earthquake occurs beneath the surface of the water, causing the seafloor to deform, and this deformation travels to the surface of the water, where it radiates out as a tsunami.”

Tsunamis caused by volcanic eruptions are more difficult. Ocean can be displaced by debris propelled into or splashed down into the water, the partial or total collapse of the volcano itself, and underwater explosions. In the following months, research on the seafloor at Hunga Tonga-Hunga Ha’apai will reveal which process, or combination of events, caused the region’s classic-style tsunami.

Small wave peaks landed at the Ogasawara Islands, some 1,000 kilometers south of Tokyo, about three hours before the big tsunami traversed the Pacific Ocean and hit Japan. Similar peaks appeared in the Caribbean Sea from Puerto Rico to Mexico on the same day, as well as 18,000 kilometers distant in the Mediterranean Sea.

Some scientists were reminded by these small, quick waves of a less common technique for Earth to produce tsunamis: by exploiting the atmosphere.

Storms may cause severe and long-lasting atmospheric disruptions. Joseph Proudman, a British mathematician and oceanographer, proposed in 1929 that if a disturbance moves at a specific speed over a body of water, it might trigger a phenomenon known as a Proudman resonance. His calculations revealed that the air pressure wave may transmit energy to water waves, causing them to become larger. Meteotsunamis are what happen when these heightened waves reach the coast.

The transmission of energy from the sky to the sea is most effective when an atmospheric disturbance moves at the same speed as the ocean waves, according to Proudman’s equations. The speed of water waves is also affected by the depth of the water. 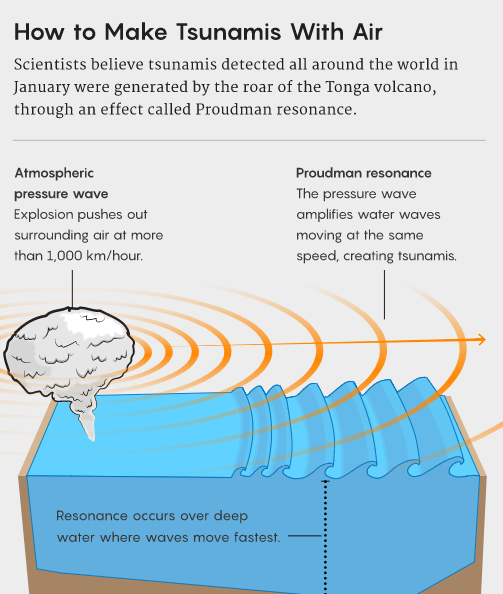 Storms generate tens of millimeters per second air pressure waves, according to Alexander Rabinovich, a meteotsunami expert at the Institute of Ocean Sciences in Sidney, British Columbia. The pressure waves resonant with equally slow water waves occurring in shallow bodies of water at that slow pace, causing severe meteotsunamis.
This is why they appear dozens of times a year in the relatively shallow waters of the United States’ East Coast, Gulf of Mexico, and Great Lakes, sometimes fatally: In 1954, a 3-meter-high meteotsunami struck Lake Michigan, killing seven people. These meteotsunamis can, on rare occasions, parallel the hazard of quake-caused tsunamis: In 1978, six-meter-high meteotsunami waves wreaked havoc on Croatia’s port town of Vela Luka, pounding against it repeatedly for many hours.
As many oceanographers, physicists, and volcanologists understood within hours after the volcano’s explosive apex, the tsunamis created by Tonga’s January eruption were extremely similar to meteotsunamis. “All of the mechanics and physics are quite similar,” Eric Anderson, a Colorado School of Mines researcher who studies interactions between the hydrosphere, cryosphere, and atmosphere, said. There is one significant distinction, though. “The entire world is affected,” Rabinovich remarked.
Heard a roar Researchers from all across the world are still debating whether sort of pressure wave, or mix of types, is to blame in this case. Multiple atmospheric disruptions were caused by the Tonga eruption, including a short-lived shock wave and globe-trotting sound waves. The explosion created atmospheric gravity waves by forcing a large amount of air upward out of the path. These are formed when a cold air mass rises quickly, then falls back to sea level due to gravity, hitting the stratosphere like a gong and causing pressure oscillations to propagate horizontally in all directions.
Given the particular areas where the tsunamis occurred, many academics believe Tonga’s atmospheric gravity waves are the most plausible source of the far-flung tsunamis. Gravitational waves flew over the earth at rates of up to 300 meters per second. To get a Proudman resonance, water waves must be traveling at a comparable rate, which necessitates very deep water. “You’ll need approximately 9,000 meters of water to generate an ocean wave that rapid,” Dusek said, “and there aren’t many sites where you can go down to that water depth.” Strong tsunamis have been reported in the Caribbean Sea and south of Japan, where ocean trenches are over 8,000 meters deep.
Sea waves flow at speeds near to the speed of sound in certain regions. That may be difficult to imagine, but on the wide ocean, waves are essentially unnoticeable. “The wave isn’t as visible on the sea surface until you approach that shallow water,” Dusek explained.
Although the Proudman resonance was most efficient atop those two trenches, some resonance and sea wave amplification would have occurred anywhere as the atmospheric gravity waves moved across the open ocean, according to Eric Geist, a geophysicist at the US Geological Survey’s Pacific Coastal and Marine Science Center. Tsunami waves may have been enhanced by the undersea topography of the seafloor near the damaged shorelines.
These theories, like the deep-trench theory, require further research before definite conclusions can be drawn. Other sorts of pressure waves may have wave heights that are increased much more. Even at this early stage, no one can deny that Tonga’s tremendous eruption caused seas and oceans on the other side of the world to tremble, crest, and convulse — a present-day finding that all but verifies a startling idea from the past.
Physics’ Oddities
Given the “great parallelism” between the Tonga and Krakatau catastrophes, the cold case of Krakatau’s worldwide tsunamis may be concluded, according to Rabinovich. However, similar to Krakatau, the chaos in Tonga has sparked fresh questions.
Although the distant tsunamis were not particularly destructive, the local tsunami created by the Tonga volcano was. Tonga has its own deep trench, therefore it’s possible that a Proudman resonance was formed near the eruption as well. “Did it add a bit more to the peak wave height than would be predicted merely from the seismic signal?” Dusek wondered.
It was a comfort that the wave heights never approached that of some storm-caused meteotsunamis. Is this, however, always the case? Researchers are unsure how intense a bomb would have to be to cause a significantly greater meteotsunami. Lane pointed out that terrestrial volcanoes may also produce large explosions, therefore are they capable of creating distant tsunamis as well?
On human timelines, volcanic events as terrifying as Krakatau’s and Hunga Tonga-Hunga Ha’apai’s are extremely rare. So far, it appears that such horrible shrieking is incapable of creating significant wave peaks over the planet. “Weather-driven meteotsunamis are still essentially what we’re concerned with from a public safety viewpoint,” Dusek said of tsunamis triggered by the atmosphere.
The sea manifestation in Tonga was not a horror show. However, it served as a reminder to scientists that nature’s use of even the tiniest physical oddities may have global effects.

Krakatau, or Krakatoa, a mountainous island in Indonesia, self-destructed in August 1883. Episodic volcanic eruptions culminated in an explosion…