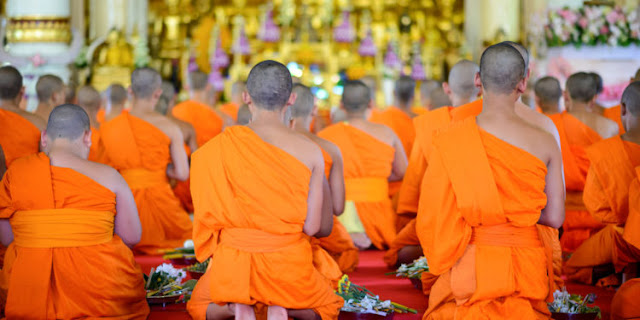 Why would someone join a group that forbade them from having children and mandated celibacy? After all, reproduction is at the very core of the evolution that gave rise to humans. However, this is exactly what many religious institutions throughout the world demand. Anthropologists are now pondering how celibacy may have first originated in light of the practice.
Since cooperation is another pillar of human evolution, some have argued that behaviors that are expensive to individuals, like never having children, can nonetheless arise when people mindlessly submit to rules that benefit a community. Others have suggested that individuals eventually establish religious (or other) organizations to further their own narcissistic or familial interests and despise others who choose not to participate.
Now, our recent study, which was done in Western China and was published in Royal Society Proceedings B, examines the topic of lifelong religious celibacy in Tibetan Buddhist monasteries.

Some Tibetan families would frequently transfer one of their young sons to the neighborhood monastery so that he may become a celibate monk for the rest of his life until recently. Up to one in seven boys in the past chose to become monks. Most often, families claimed that having a monk in the family was for religious reasons. But were there additional factors related to the economy and reproduction?
We conducted 530 family interviews in 21 villages in the eastern portion of the Tibetan plateau in Gansu province with the assistance of our Chinese partners from Lanzhou University. We recreated family trees, learning about each person’s ancestry and discovering whether any of their ancestors were monks.
Amdo Tibetans, who are patriarchal, live in these villages where they cultivate tiny pieces of land and keep herds of yaks and goats. In these societies, wealth is often handed through the male line.
We discovered that guys who had a monk sibling were wealthy and owned more yaks. But monastic nuns received little to no benefit. That is probably due to competition between brothers over their parents’ money, land, and animals. Parents ended this rivalry between their boys by sending one of their sons to the monastery because monks are not allowed to acquire property. While monks are often second or later born sons, firstborn sons typically inherit the familial home.

Surprisingly, we also discovered that men who had a monk brother had more children than men who had non-monk siblings, and their spouses tended to have kids sooner. The number of grandkids of grandparents who had monk sons increased as a result of their non-celibate sons having less or no competition from their siblings. Therefore, sending a son to the monastery is a custom that supports a parent’s goal in procreation rather than costing them money.

A theoretical framework for celibacy

This raises the possibility that celibacy might develop naturally. We created a mathematical model of the evolution of celibacy in which we examined the effects of becoming a monk on a man’s evolutionary fitness as well as the evolutionary fitness of his siblings and other village members in order to learn more about the specifics of how this occurs. We modeled both the situation when a child’s parents decide to send him to a monastery, as appears to be the case in our field study, and the situation where a boy makes his own decision.
Because monks are unmarried, there are fewer men vying for the women’s hand in marriage in the community. But even while being a monk can be advantageous for all the males in the village, the monk’s choice does not improve his own genetic fitness. Celibacy shouldn’t change as a result.
But if having a monk brother increases men’s riches and makes them more attractive to women, the situation changes. Since the monk is encouraging his brethren to have more children while not having any children himself, religious celibacy can now evolve through natural selection. However, if the decision to become a monk is left up to the child, it is likely to stay uncommon because it isn’t very advantageous from a personal standpoint.

In the model, we demonstrate that celibacy only becomes significantly more prevalent if the parents determine it should occur. Parents send one child to the monastery as long as it benefits the others since they all get fit via having children. The fact that boys were welcomed into the monastery at an early age and suffered shame if they subsequently abandoned their vocation implies that this was a cultural practice influenced by family values.

This approach could also provide light on how infanticide and other forms of parental favoritism have developed in different cultural situations. A similar approach might also help to explain why female celibates (nuns) are uncommon in patriarchal civilizations like Tibet but more prevalent in societies where women are more competitive with one another, such as in societies where they have more inheritance rights (such as in parts of Europe).
In order to comprehend why the prevalence of monks and nuns differs among religions and geographical regions, we are now conducting new studies.
It is frequently argued that when individuals adapt to a new norm, the diffusion of new ideas—even illogical ones—can lead to the establishment of new institutions. However, it’s possible that people’s choices on reproduction and economics might also influence institutions. The Discussion

Why would someone join a group that forbade them from having children and mandated celibacy? After all, reproduction is at…

People frequently declare, “I saw it with my own eyes.”  The assumption is that something must have happened because we perceived it. However, what we see may be impacted by a variety of factors, including our own expectations and preconceptions, as demonstrated by a peculiar new experiment. Researchers have uncovered a “novel perceptual illusion” that successfully reorders the apparent temporal order of events…