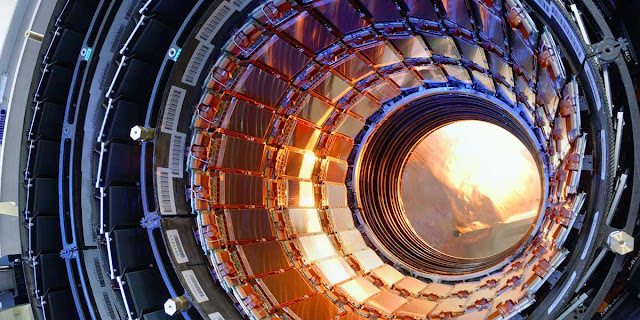 The Large Hadron Collider is poised to begin smashing protons together at unprecedented energies in its effort to uncover further mysteries about how the universe functions, ten years after it found the Higgs boson.

The biggest and most potent particle collider in the world resumed operation in April following a three-year hiatus for modifications in anticipation of its third run.

The European Organization for Nuclear Research (CERN) declared during a press event last week that it will start operating on Tuesday and continue for almost four years at a record energy of 13.6 trillion electronvolts.

It will revolve a 27-kilometer (17-mile) ring buried 100 meters beneath the Swiss-French border with two proton beams traveling in opposing directions at almost the speed of light. Protons are the building blocks of atoms.

Numerous experiments, such as ATLAS, CMS, ALICE, and LHCb, which will employ the increased power to investigate dark matter, dark energy, and other basic mysteries, will record and analyze the ensuing collisions.

One billion crashes every second

According to Mike Lamont, head of accelerators and technologies at CERN, “we want to be producing 1.6 billion proton-proton collisions per second” for the ATLAS and CMS investigations.

He stated that in order to boost the collision rate, the proton beams would be shrunk to fewer than 10 microns this time around—a human hair is around 70 microns thick.

They will be able to further explore the Higgs boson, which was originally discovered by the Large Hadron Collider on July 4, 2012, thanks to the new energy rate.

The boson’s compatibility with the Standard Model, the dominant hypothesis of all the elementary particles that comprise matter and the forces that control them, played a role in the discovery’s revolutionary impact on physics.

However, a number of recent discoveries have cast doubt on the Standard Model, and the recently improved collider will examine the Higgs boson in greater detail.

CERN director-general Fabiola Gianotti, who made the first announcement of the boson’s discovery ten years ago, stated that the Higgs boson is connected to some of the most significant unanswered topics in basic physics at the present time.

There will be 20 times more collisions this time around compared to the collider’s initial run, which led to the discovery of the boson.

Lamont stated, “This is a big rise, opening the door for new discoveries.

There is still a great deal to learn about the boson, according to Joachim Mnich, director of research and computing at CERN.

He questioned whether the Higgs boson was indeed a fundamental particle or just a composite.

Are there any more Higgs-like particles, or is this the only one?

A new season of physics

More than 60 composite particles predicted by the Standard Model, including the tetraquark, have had their masses measured by previous experiments, including the mass of the Higgs boson.

However, according to Gian Giudice, head of CERN’s theoretical physics division, looking for particles is only one aspect of the work.

The purpose of particle physics is to understand the why, he stressed, not just the how.

One of the nine experiments at the Large Hadron Collider is ALICE, which examines the stuff present in the first 10 microseconds after the Big Bang, and another is LHCf, which simulates cosmic rays using collisions.

Following this run, the collider will return in 2029 as the High-Luminosity LHC, doubling the quantity of events that may be detected.

Beyond that, the researchers are designing the Future Circular Collider, a 100-kilometer ring with an astounding target energy of 100 trillion electronvolts.

However, for the time being, scientists are anxiously awaiting data from the third run of the Large Hadron Collider.

CERN declared that “a new physics season is beginning.”