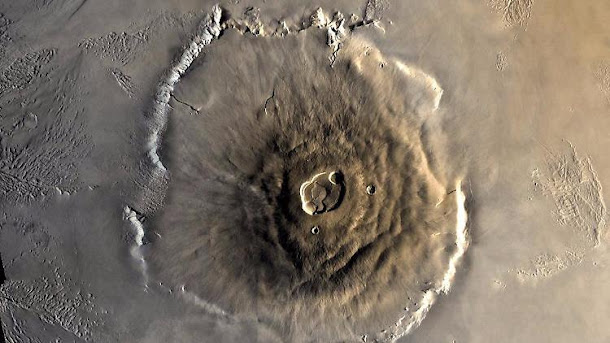 Nothing compares to reaching the summit of a mountain and looking down in wonder at the scenery below while you collect your breath. Some individuals are drawn to climb the world’s tallest mountains, the most famous of which being Mount Everest in the Himalayan mountain range.
While reaching the peak of Mount Everest is an incredible achievement, the highest mountain on Earth is actually one of the lesser mountains in our solar system — and it isn’t even the tallest mountain on our planet, depending on how you measure it! What is the solar system’s highest mountain? The answer, as well as its location and huge size, may surprise you.
Most people are astonished to find that the solar system’s highest peak is not on Earth. After all, there aren’t many other terrestrial – often known as “rocky” – planets and moons in the solar system that are large enough to support a massive mountain.
Olympus Mons on Mars, however, is the highest mountain in the solar system. This massive stratovolcano rises 16 miles or 84,480 feet (25 kilometers) above the surface of Mars, and is one of a dozen massive volcanoes on the red planet. In comparison, Mauna Kea, the world’s highest volcano, is just 6 miles (10 kilometers) tall and only 2.6 miles (4.1 kilometers) above sea level.
Even more stunning, a massive caldera (crater) runs 50 miles (80 kilometers) over the summit of Olympus Mons. Meanwhile, Olympus Mons’ base stretches for 341 miles (549 kilometers), roughly the length of Mississippi.
Olympus Mons is more than double the height of Mount Everest, which is surprising given that Mars is half the size of Earth in terms of circumference. Olympus Mons and its monster brothers are thought to have grown so large as a result of three reasons, according to scientists.
First, Mars has a significantly higher volcanic activity than Earth. While our planet has experienced periods of severe volcanic activity in the past, Mars has had considerably more volcanic activity for much longer.
Tectonic plates on Mars also move more slowly than they do on Earth. While enormous mountains on Earth may be forced beneath other tectonic plates — a process known to planetologists as subduction – or otherwise influenced by tectonic activity, this permits huge mountains to originate – and stay.
Finally, due to variances in the mass of each planet, the gravitational force on Mars is only approximately 38% as strong as it is on Earth. Because gravity does not draw down the magma in the same way it does on Earth, scientists believe this might allow mountains to “grow” taller.
These forces have combined to make Olympus Mons the largest mountain in the solar system, which it has remained for billions of years.

If the tallest mountain in the solar system is on Mars, how do the tallest planets of our planet stack up? While most people believe Mount Everest is the highest peak on the planet, its elevation of 29,029 feet (8,848 meters) merely makes it the highest mountain above sea level. It is not, however, the world’s highest peak. The highest mountain on Earth, Mauna Kea in Hawaii, rises 33,500 feet (10,210 meters) above the seafloor.
And if you want to get really technical, the tallest mountain from the center of Earth is Mount Chimborazo. This Ecuadorian stratovolcano is almost 6,800 feet (2,072 meters) higher than Everest (2,329 feet or 710 meters taller than Mauna Kea). This is due to the Earth’s centrifugal bulge, which means it’s somewhat broader around the equator.