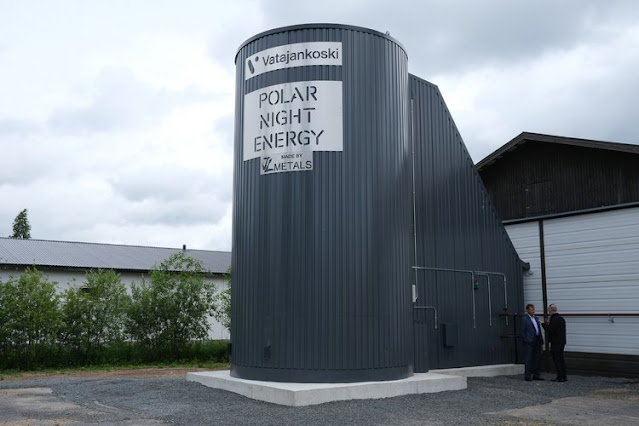 The system installed by Polar Night Energy at the location of a power plant run by utility Vatajankoski has started operating. It is based on its proprietary technology.

Hundreds of tonnes of sand that may be heated to temperatures between 500 and 600 degrees Celsius are housed in a 4 by 7 meter steel container. In order to be used in the neighborhood district heating system, the heated sand is stored using renewable power.

Finland, which has lengthy, extremely severe winters and was recently shut off from Russian gas supply due to a payment dispute, has a strong use case for it. The storage system’s creators claim that it is inexpensive and simple to assemble.

According to a report from UK broadcaster BBC, the system can discharge a maximum of 100kW of heat power and has a total energy capacity of 8MWh, translating to up to 80 hours of storage duration. However, officials now seek to grow the system to one thousand times greater, or 8GWh.

“This invention is a component of the switch to green and smart energy. Increases in the electrical grid’s use of intermittent renewable energy sources can be greatly aided by heat storages. At the same time, waste heat may be primed to a level where it can be used to heat a metropolis. According to Markku Ylönen, co-founder of Polar Night Energy, this is a natural step toward the generation of heat without combustion.

In order to prime the waste heat they have recovered from their data servers so that it can be supplied into the district heating network, Vatajankoski also utilizes the heat from the storage.

It is the second significant thermal storage facility built this week using a distinct (though not groundbreaking) technical approach. Vattenfall, a Swedish public utility, is set to begin filling a Berlin thermal energy storage facility with a 200MW rating—basically, a huge water tank.

There are numerous applications for hydrogen fuel cells in vehicles such as trucks, buses, ships, trains, planes, and, to…