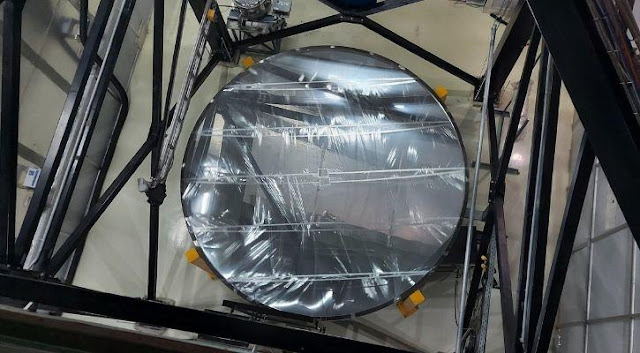 The biggest liquid mirror telescope in the world is prepared to see the stars.

The four-meter International Liquid Mirror Telescope (ILMT) is the first liquid telescope designed exclusively for astronomy and is situated in the Devasthal Observatory in India’s Himalayas, at an elevation of 8,038 feet (2,450 meters).

The majority of telescopes utilize glass mirrors, however the ILMT’s mirror is comprised of a tiny coating of liquid mercury that spins every eight seconds while floating on 10 microns of compressed air. Paul Hickson, an astronomer at the University of British Columbia who worked on the telescope, said in a statement: “By way of comparison, a human hair is around 70 microns thick” (opens in new tab). Even smoke particles might harm the air bearings because of their extreme sensitivity.

The parabolic shape of the liquid mercury, which takes on the form of a contact lens due to spinning, is what enables the telescope to concentrate light from outer space. Although glass telescope mirrors are parabolic, it takes far more work to shape solid materials, making liquid mirror telescopes much more economical than traditional ones.

The ILTM’s fixed location means that, as the Earth spins under it, it can only view a small portion of the night sky at a time. However, because it will be so narrowly focused, the telescope is excellent for identifying fleeting objects like supernovas and asteroids.

According to project director Jean Surdej of the Universities of Liège, Belgium, and Poznan, Poland, “the gathered data will be perfectly suited to do a thorough photometric and astrometric variability investigation over a period of roughly five years.” .

The ILTM, which is anticipated to start conducting scientific observations later this year, will run from October through June every year, closing for the rainy season in India. Institutions from India, Belgium, Poland, Uzbekistan, and Canada are working together on the project internationally.